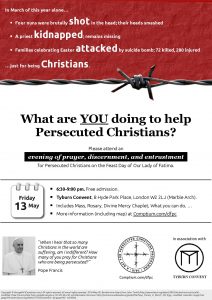 An ecumenical prayer service for persecuted Christians around the world will take place at Tyburn Convent in London on Friday 13 May 2016, the Feast of Our Lady of Fatima.

Tyburn Convent is located at the site where 105 Catholics who were martyred for their faith between 1535 and 1681.

St Oliver Plunkett was the last Tyburn Martyr on 1 July 1681. The Archbishop of Armagh and Primate of all Ireland was brought to London for a rigged trial, found guilty of treason and sentenced to die the traitor’s death.

Friday’s evening prayer service takes place from 6.30-9.30pm and includes Mass, Rosary, Divine Mercy Chaplet, and reflection on what can be done to help.

The evening has been organised by DfPC (Day of Prayer and Fasting for Persecuted Christians) was launched in January 2014 in London, and was accompanied by Masses and prayers in Rome and countries where persecution is taking place.

Its core mission is to save and heal persecuted Christian lives across the world – through prayer, fasting, and discernment.

The DfPC programme uniquely integrates journalistic and spiritual elements to provide awareness of, and a response to, the persecution that Christians are facing worldwide.

It directly responds to calls by Pope Francis, the Archbishop of Canterbury, and other religious leaders for support of the persecuted.

One of its central inspirations is, “We stand in solidarity and pray for Christians from all denominations suffering persecution – one body under Christ (John 17:11, Romans 12:4-5).”

Pope Francis has challenged people, “When I hear that so many Christians in the world are suffering, am I indifferent? How many of you pray for Christians who are being persecuted?”

The Archbishop of Canterbury has also appealed for prayers for “Christians… attacked and massacred, driven into exile from areas in which their presence has always been central, undoubted, essential, richly contributing, faithful.”

Article 18 of the Universal Declaration of Human Rights (UN) states, “Everyone has the right to freedom of thought, conscience and religion; this right includes freedom to change his religion or belief, and freedom, either alone or in community with others and in public or private, to manifest his religion or belief in teaching, practice, worship and observance.”