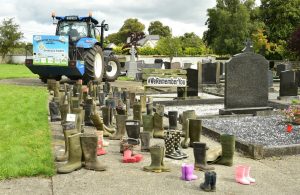 A ‘walk of light’ for those killed and injured in farm accidents was part of the opening ceremony at the National Ploughing Championship on Tuesday (18 September).

The procession was led with candles and a picture of wellingtons collected in 32 counties – each pair representing someone who has been killed or seriously injured in farm accidents.

Bishop Denis Nulty of Kildare and Leighlin Diocese led prayers remembering those who died in accidents.

“The empty wellington boots bring back the phrase of a son or daughter saying to a father or mother ‘one day I’ll wear your boots’. The empty boots remind us that too many loved ones have lost their lives in farm accidents,” said Bishop Nulty.

He prayed that there might be greater awareness of farm safety and for those in the Embrace FARM organisation and those who work towards improving safety on farms and in the countryside. He prayed for the souls of the dead and concluded with the lines: “Those who we loved don’t go away. They walk beside us every day, unseen, unheard, but always here, still loved still missed but very dear.”

The moment of prayer came at the conclusion of Embrace FARM’s ‘Our Drive to Remember’ around Ireland’s 32 counties in a tractor. In a bid to raise awareness about farm deaths, it set off from the Tullamore Show on 12 August and concluded on 18 September at the National Ploughing Championship, held near Tullamore, Co. Offaly.

Some 150 drivers drove 5,764 km, with the assistance of local Macra na Feirme clubs and Young Farmers’ Clubs of Ulster. At each stop, members of the farming community gathered to remember victims of farm accidents and to offer the fruits of fundraising to Embrace FARM.

For example, at the Kildalton Agricultural College, Co. Kilkenny, on 13 September, staff members put wellies into the transporter box on the tractor in memory of past students of Kildalton College who lost their lives as a result of farm accidents. 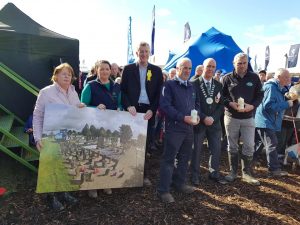 Bishop Nulty with members and supporters of Embrace FARM

The tractor visited the Church of the Assumption, Tullamore, for a harvest Mass on Sunday 16 September. Brian and Norma Rohan, who founded Embrace FARM, lit a candle to remember all those who have been affected by farm accidents.

In Limerick, Macra members and Embrace FARM visited the Munster GAA council offices and took the Liam McCarthy Cup on the tractors on their visits around Limerick.

Wellies collected during the 32-county drive were displayed at the Embrace FARM stand in the Health & Safety village at the National Ploughing Championship. Anyone affected by farm accidents was welcomed on the stand.

Embrace FARM was set up after the death of Brian Rohan’s father, Liam, in a tragic farm accident near Shanahoe, Co. Laois. The charity provides  bereavement support for farm families. It helps families who have lost a loved one or suffered serious injury in a farming accident.