Prayers at commemoration for Irish famine 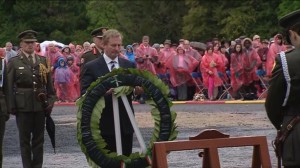 Msgr Dolan, who was representing Bishop Christopher Jones of Elphin, was among leaders of ten denominations, religions and convictions present including Church of Ireland, Presbyterian and Methodist, Judaism, Islam and Humanist.

Local parish priest, Fr Ciaran Whitney told CatholicIreland.net “The people who went to it just wanted to pay their respects to the famine victims. But there is a certain amount of guilt among people, because they (and their ancestors) did survive and others didn’t.”

He said that at the parish Mass on Sunday morning they prayed for the famine victims in the prayers of the faithful. “The parish council discussed the commemoration and decided to also take up a collection for Trócaire at the Mass.”

Canon Liz McElhinney of the Church of Ireland, who was among those who offered prayers, readings and reflections at the commemoration, said: “On a day when we know little discomfort, apart from rain, we remember those on whom the rains of Roscommon poured when their stomachs were empty and their limbs were bare.”

Speaking at the event, the Taoiseach described the famine as a “national horror”.

Enda Kenny said the people suffered “slow, starving deaths in the fields around here, in the cabins, the ditches, the towns and cities, to the degree that the most notable sight in this country was that of men and women carrying coffins in their arms, on their shoulders, on their heads until such was the onslaught of death, that the coffins themselves ran out.”

He spoke of modern Ireland’s contribution to combat poverty through foreign policy and overseas development assistance programme under Irish Aid.

“Our history of famine means that Irish people have a particular empathy with those suffering the effects of hunger in the world today,” the Taoiseach said.

He said that at a global level, strong advocacy actions, interventions, and key areas of support for global initiatives are making Ireland a leader in the fight against hunger. 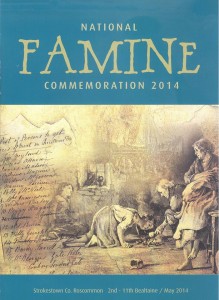 “Today, across the world, Ireland and the Irish are synonymous with aid, outreach and compassion,” Enda Kenny commented.

Around one million Irish people perished, from hunger or hunger-related diseases due to the famine.

In the decade following 1846, the floodgates of emigration opened as those most severely affected by the famine fled, and more than 1.8 million Irish emigrated, with more than half of these fleeing during the famine years of 1846-50.

Roscommon was severely affected during this time. In the short period 1841 to 1851 more than 32% of the county’s population vanished either through death or emigration. At Strokestown the population of the Mahon estate declined by nearly 60%.

Minister for Arts, Heritage and the Gaeltacht, Jimmy Deeihan, who was also present, praised Strokestown Park and those who worked tirelessly over the last 20 years to ensure that the victims of the Irish famine are remembered through the museum collection, material which helps examine the themes of the famine such as blight, eviction and emigration.

The ceremony was a formal state ceremony encompassing military honours and a wreath laying ceremony by Ambassadors to Ireland in remembrance of all those who suffered or perished during the Famine.

A record number of representatives from the diplomatic corps attended this year’s event. They represented countries such as Israel, Palestine, France, Germany, Ethiopia, Lesotho, Cuba. USA, Russia and Ukraine, as well as the papal nuncio.

There was also a 10 day programme of lectures, walks, tours and much more organised by the local community in Strokestown.