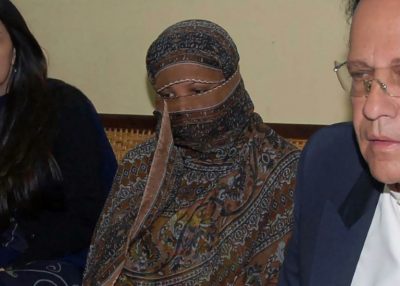 Irish charity ‘Church in Chains’ will hold a protest and prayer vigil at the Embassy of Pakistan in Dublin later today to show solidarity with Asia Bibi, the Christian woman from Punjab province who was sentenced to death under Pakistan’s blasphemy laws.

On 31 October, Asia Bibi was acquitted of blasphemy by Pakistan’s Supreme Court and a week later (7 November) she was released from prison after spending from 2009 until 2018 incarcerated.

It is believed she was flown to Islamabad, the capital of Pakistan, after her release, and is being held under heavy security.

Her acquittal sparked widespread protests by Muslim extremists demanding that she not be allowed leave the country until judgment is given on a review petition filed against the Supreme Court acquittal by the original complainant.

The authorities are keeping Asia Bibi’s movements and whereabouts secret for security reasons. While she remains in Pakistan, she and her family face a real danger of being killed.

Speaking in advance of Wednesday’s protest, David Turner, Director of Church in Chains, explained that the embassy vigil was being held for two reasons.

“To highlight the dreadful injustice that Asia Bibi has suffered in that she has been declared innocent by the highest court in Pakistan, released from prison but is still not free. Instead of being allowed leave the country as a free woman, she is still effectively a prisoner and her life and that of her family are in grave danger.”

The other reason, David Turner explained, is to give Irish supporters an opportunity to gather at the Embassy of Pakistan to stand up for Asia Bibi and “to pray for a breakthrough in this situation”.

Initial reports that she was on a plane to the Netherlands have been firmly denied by a spokesman for Pakistan’s Foreign Ministry, who said that she will not be flown out of the country until judgment is given on the review petition filed against the Supreme Court acquittal.

While such petitions are normally adjudicated within 30 days, the Chargés d’Affaires at Pakistan’s Dublin Embassy said earlier this week that the Supreme Court was extremely busy and many other cases could take priority.

There is continuing confusion about whether or not Asia Bibi’s name has been placed on Pakistan’s Exit Control List – a key demand of the protesters who brought many parts of Pakistan to a standstill last week as they called for her to be hanged.

Christians in Pakistan remain deeply concerned for her safety and also for the safety of Pakistan’s Christians in general.

One source told Church in Chains, “We fear there may be more violence on Friday, because in extremist mosques this will certainly be discussed. Friday protests have already been called. It’s possible Christians will be targeted.”

Wilson Chowdhry of the British Pakistani Christian Association recently spoke to the family of Asia Bibi and they said that it was of the utmost importance that there be no further speculation on her whereabouts by concerned groups or international media. “She and her family and guardians all face a real danger of being killed,” he warned.

Meanwhile, more than 230 parliamentarians from a number of countries have signed an open letter to the Pakistani Prime Minister, urging his government to secure safe passage for Asia Bibi and those under threat because of her acquittal.

In the letter, addressed to Prime Minister Khan, the parliamentarians state, “We, the undersigned parliamentarians, write to you from many nations including states that provide financial assistance to Pakistan.

“We celebrated the decision of the Supreme Court to acquit Asia Bibi and were pleased to see the government defend the judiciary in the days that followed. However, it has since been reported that because of the political deal struck with Tehreek-e-Labbaik Pakistan, Asia Bibi is, once again, effectively on death row.

“We are aware that a review of the Supreme Court verdict could take years, leaving Asia incarcerated for that time or vulnerable to mob violence if released. We understand that the decision to review the ruling was made for political, rather than legal, reasons.

“What happens next in this sad story will show the world whether Pakistan is a nation that respects the rule of law, or whether political interests will prevail.”

The peaceful protest in Dublin will be held outside the Embassy of Pakistan, 1-B Ailesbury Road, Ballsbridge, Dublin 4 from 1 p.m. to 1.30 p.m.