Home > Featured > Prayer for the ploughing

Prayer for the ploughing 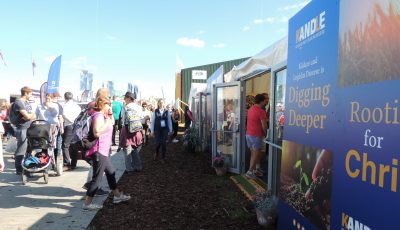 Kildare and Leighlin at the Ploughing

There has been a huge response to Bishop Denis Nulty’s call for Ireland’s favourite prayer for the 88th National Ploughing Championships.

After the initial call for nominations, a shortlist was created with the top five prayers for people to vote on at the Ploughing Championships, or “the Ploughing” as the event is called. There was also a call for people to compose new environmental prayers.

“The last time that Kildare and Leighlin Diocese hosted the Ploughing Association in Rathneska we had a ‘Poem for the Ploughing’. This year we had a ‘Prayer for the Ploughing’. We looked for two things – Ireland’s traditional prayer and secondly a prayer that cares for the earth, cares for the green biodiversity. We got super entries on the second and huge entries on the first,” Bishop Nulty told CatholicIreland.net on the event site at Ballintrane, near Fenagh in Co. Carlow.

The traditional prayers on the shortlist are: “O Angel of God”, “Our Father”, “Hail Mary”, “Memorare”, and the Rosary.

“So there is a lot of Marian devotion there,” said Bishop Nulty.

Each day people at the Ploughing write their vote and post it on a colourful display on the wall. The care for the environment prayers are in a folder on the Kildare and Leighlin Diocese stand. They have been sent in from entire classes in schools and from individuals. Some are typed, with pictures of trees and flowers; others have hand-drawn pictures; and some are handwritten.

Many include descriptions of the nature around the schools and locality like the River Barrow. One young person’s prayer asking for good weather for the Ploughing had already been answered, as the sun shone down on an event that has often been wet and muddy.

“They are wonderful,” said Bishop Nulty. He added that the prayers for the environment represent “a new beginning”. Bishop Nulty has already spoken about the annual Season of Creation, which the Universal Catholic Church marks from 1 September to 4 October.

He felt that because the Ploughing focuses on rural living, it was an appropriate event to find a new prayer about caring for “our common home”. He is to announce the winning prayers before the end of the three-day event.

The Ploughing, which is hailed as the biggest European outdoor farming event, is back in the Diocese of Kildare and Leighlin this year, having been in the Meath Diocese near Tullamore, Co. Offaly last year.

Bishop Nulty explained that the diocesan stand was a haven in what is a busy and often frantic event, but also an opportunity for people to meet and greet. The Papal Nuncio of Ireland, Archbishop Jude Thaddeus Okolo, was present to greet people on the first day of the event.

“It’s not his first ‘ploughing’. He was in Tullamore, but this is his first ploughing in our diocese,” said Bishop Nulty.

As with all stands at such events, there are giveaways, hospitality and a “cuppa”. The diocesan stand is a little unique, as prayer cards, wristbands and slogans like “Dig deep for Christ” were on offer. There was also the traditional salt, which is blessed and sprinkled on the land and stock by farm families.

Bishop Nulty said that the diocese wants to keep in touch with people in what he said was “the middle of this busiest spot in Ireland today here in Fenagh, Carlow. He added it was important “that we create a space here for God”.

The Novice master of the Jesuits and some novices also visited the diocesan stand. But they had their own stand with books, prayer cards, and free copies of the Messenger magazine. The Sacred Space book was selling well and people were flocking to the stand for a special Blessed John Sullivan blessing.