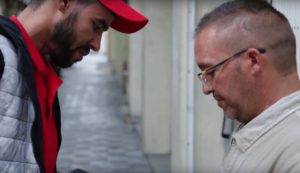 The Pope’s intention for the month of October is that we should pray for the rights of workers and the unemployed.

As is now customary, the Apostleship of Prayer has issued an inspirational video focussed on the Pope’s intention for this month, featuring His Holiness speaking from his office intercut with a range of workers going about their daily business. The Pope’s video starts with a young office worker being helped by a more senior colleague. Then as the Pope’s words remind us to remember the dignity of all those who work, we see the young office worker holding the door open for a pizza delivery man. Shots of dock labourers are followed by footage of an unemployed man handing out his CV door-to-door.  The unemployed man bumps into the delivery man, who gives him details of how to apply for work with the pizza company. The video comes full circle with the formerly unemployed worker delivering a pizza to the older office worker who is working late at home.

In the voice over accompanying the video, Pope Francis tells us: “We should always remember the dignity and rights of those who work, condemn situations in which that dignity and those rights are violated, and help to ensure authentic progress by man and society.

“Let us pray that all workers may receive respect and protection of their rights, and that the unemployed may receive the opportunity to contribute to the common good.”

The Apostleship of Prayer was founded by Jesuit seminarians in 1844 and today it is also known as the Pope’s Worldwide Prayer Network. Actively present in more than 98 countries,there are more than 35 million people praying for the pope’s intention every month, as part of a parish group, a youth group or as an individual endeavour. The Worldwide Prayer Network’s youth branch is the Eucharistic Youth Movement.

You can view the video by visiting Popevideo.org or clicking the link at the bottom of the CatholicIreland.net homepage.