Home > Featured > Pray we must and in God we trust, declares New York cardinal at Republican Convention

Pray we must and in God we trust, declares New York cardinal at Republican Convention

The Republican National Convention, which officially nominated Donald Trump for re-election as President of the United States, opened with an imperative prayer by Cardinal Timothy Dolan, Archbishop of New York.

In his prayer, delivered by video-link from New York to the Charlotte Centre in North Carolina, where only 300 delegates were allowed be physically present, the cardinal repeated the formula ‘pray we must’ in his spiritual message.

Speaking from the banks of the Hudson River, with the Statue of Liberty behind him, the Cardinal began by saying: “Let us pray. And pray we must, as grateful citizens of a country we boldly claim to be one nation under God.”

He then said: “Pray we must, praising the Lord for a country where freedom of religion is so cherished.” 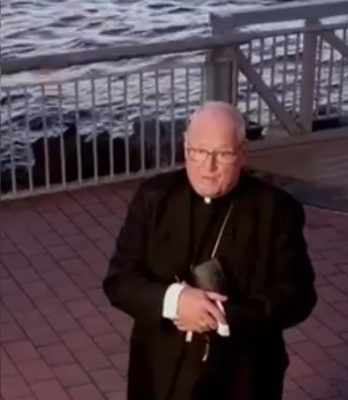 The cardinal addressed the Republican National Convention from the shores of the Hudson River in New York. (Pic RNC)

This was a marked comment, as the Republican Party has regularly highlighted Cardinal Dolan’s criticism of President Barrack Obama in 2012, when he introduced measures that required all employers, including religious organisations, to include access to contraception services as part of employee health plans.

Putting politicking aside, the cardinal’s opening address continued by praying for those suffering from COVID-19 and for those ‘wearied front-liners’ who care for them.

Then, in an America where policing policy and practice has become politicised, the New York-based church leader said: “Pray we must that all lives may be protected and respected, in our troubled cities and the police who guard them. In tense world situations where our men and women in uniform keep the peace. For the innocent life of the baby in the womb. For our elders in nursing care and hospice. For our immigrants and refugees. For those lives threatened by religious persecution throughout the world, or by plague, hunger, drugs, human trafficking or war.”

Then, echoing the motto of the United States, which appears on all American treasury bills, the cardinal concluded his address by saying: “Pray we do, for we dare claim: In God we trust.”