“We pray for the people of the city of Orlando” 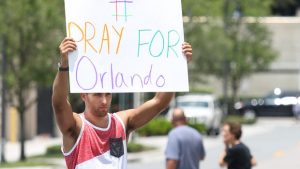 Bishop Brendan Leahy of Limerick has appealed to the public to keep the people of Orlando in their prayers as he offered support to Bishop John Gerard Noonan of Orlando, who is a Limerick native.

On Tuesday, Bishop Leahy described the attack in Orlando as “beyond words” following the savage killing of 49 innocent people “so mercilessly”.

“It reminds us yet again of the dreadful intent of terrorists,” Dr Leahy said.

Noting that Bishop Noonan is originally from Corbally in Limerick city, Bishop Leahy said the Florida bishop had captured the sense of shock and hurt that Orlando has experienced when he said “a sword has pierced the heart of our city”.

“He has asked for prayers for the victims, the families and first responders as well as for victims of violence and acts of terror; for their families and friends and all those affected by such acts against God’s love and I know that we will all keep them in our prayers and thoughts this week.”

“We pray for the people of the city of Orlando that God’s mercy and love will be upon us as we seek healing and consolation.”

A prayer vigil for victims of the massacre and their families will be held in St Mary’s Cathedral, Limerick today at 7.30pm.

Separately, Archbishop Diarmuid Martin of Dublin has asked that those who died or who remain injured and all those who mourn and grieve in Orlando be remembered in the Prayers of the Faithful at all Masses in Dublin this coming weekend.

In a statement on Tuesday, the Archbishop said, “People all around the world are shocked with the news of the terrible loss of life at the Pulse Nightclub in Orlando.”

“How do we explain that our modern society can somehow be held to ransom in successive gun attacks by individuals or small groups filed with hatred?”

“This time, the victims were members of the LGBT community; in other cases the victims were from the media or simply innocent by standers. Fingers and blame are unfoundedly often hastily pointed at the entire honest Islamic community.”

He added, “Any culture which gives notoriety to violence only encourages the deranged or the simply evil to attempt to repeat such actions.”

Archbishop Martin also stressed that as followers of Jesus Christ, Christians should work more and more “to purify ourselves from all prejudice, to be in the forefront in dialogue and reconciliation and have the resolution to courageously confront those who anywhere foster violence.”

The Church of Ireland Archbishop of Dublin, Dr Michael Jackson said in a statement, “Outrage and incredulity combine as we in Ireland, like the rest of the world, try to take in the enormity and the evil of the horrific events in Orlando, Florida, over the weekend.”

“These events, targeting a specific section of the community, have, once again, brought terror and hatred to the forefront in a place where people have been among friends and living their lives.”

“As people come to terms with the attack on Pulse Nightclub in Orlando, we hold all those who have lost their loved ones and all who have been injured and traumatised by the mass shooting in our prayers.”

“We remember victims, friends and family members at this time of devastation. We echo the statements which say that this had nothing to do with religion.”

“Right across the faiths of the world we long and pray for a time when there will be an end to such attacks and an end to the needless and senseless loss of human life.”

A candle was lit in one of the side chapels of Christ Church Cathedral, Dublin, yesterday in memory of those who died in the attack accompanied by a request for prayers for the victims and all affected by the shooting.