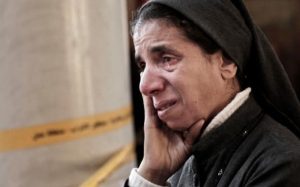 Coptic nun weeps after bomb attack on Mar Girgis Church in Tanta, one of the oldest Christian churches in Egypt, dating back to the year 316. Pic courtesy: The Telegraph

The Church of Ireland Archbishop of Dublin and Glendalough has expressed solidarity with Coptic Christians in Egypt following two deadly terror attacks on Sunday which killed 44 and left scores of others injured.

In a statement on Monday, Archbishop Michael Jackson said both attacks targeted Palm Sunday services which were attended by innocent men, women and children celebrating Christ’s entry into Jerusalem.

“We pray for Christians in Egypt who show such courage and resilience in continuing to witness to Christ despite increasing danger and rising attacks on their communities. We pray for their leaders as they continue to meet the spiritual and pastoral needs of their people,” the Archbishop said in his statement.

The attacks happened at the historic Coptic church in Tanta, north of Cairo, when a suicide bomber approached the altar and exploded a device which killed thirty worshippers. Mar Girgis Church in Tanta is one of the oldest Christian churches in Egypt, dating back to the year 316.

Another suicide bomber struck at St Mark’s Cathedral in Alexandria, where the Coptic Pope Tawadros was presiding at Palm Sunday services. At least a dozen people were killed in this attack, but Pope Tawadros escaped injury.

Islamic State claimed responsibility for the bombings, but Egyptian authorities suggested that the Muslim Brotherhood was also involved.

In Rome on Sunday, Pope Francis condemned the attacks. In his Angelus address, the Pontiff told pilgrims gathered in St Peter’s Square, “We pray for the victims claimed this [Sunday] morning.

“To my dear brother, His Holiness Pope Tawadros II,” Pope Francis continued, “to the Coptic Church and to all the dear Egyptian nation I express my deep condolences. I pray for the dead and the injured, and I am close in spirit to the family members [of the deceased and injured] and to the entire community.”

Pope Francis went on to pray, “May the Lord convert the hearts of the people who are sowing terror, violence and death, and also the hearts of those who make and traffic weapons.”

According to CNS, Pope Francis will not cancel his visit to Egypt despite the terrorist attacks on Egypt’s minority Christian communities.

“The Pope’s trip to Egypt proceeds as scheduled,” Greg Burke, Vatican spokesman, told Catholic News Service. The Pope is scheduled to meet governmental and interfaith leaders during his visit from 28–29 April to Cairo.

CNS also reported Fr Rafic Grieche, spokesman for the Egyptian bishops, as saying that “Egyptians are looking forward to Pope Francis’ visit, although the atmosphere at present is heavy.”

He added, “The Pope’s mission is to be beside his brothers at the time of difficulty. Now is the real time that he can bring peace and hope to the Egyptian people as a whole and to the Christians of the East in particular,” Fr Grieche said.

In his statement on Monday, Archbishop Jackson of Dublin and Glendalough recalled how, “Representing the Archbishop of Canterbury, I attended the consecration of Pope Tawadros II in the Cathedral of St Mark. I have been received by him as a Member of the Anglican Oriental Orthodox Commission.

“My thoughts and prayers are with him and all those affected by such atrocities on what was a day of solemnity and celebration in the Christian Year. Sunday’s Epistle reminded us from St Paul’s Letter to the Philippians: Let this mind be in you that was also in Christ Jesus (Philippians 2:5). We pray for solidarity in suffering, compassion in sorrow and stability in government in Egypt today.”

In Dublin, the Egyptian Copts are members of the Dublin Council of Churches.

In October, Archbishop Jackson will welcome to Dublin members of the Anglican Oriental Orthodox International Commission which includes representatives of the Copts, Armenians, Syrians, Indian Orthodox and Ethiopians.