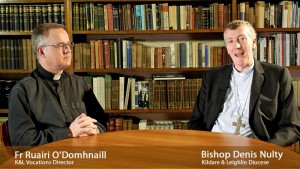 “It was a big initiative for the bishop. I’m the only person full-time for vocations for any diocese in Ireland,” he told CatholicIreland.net.

Fr O’Domhnaill had no ‘template’ when he began.

“But then I opened the Gospels and saw that basically Jesus talks twice about vocations. He prays for the ‘Lord of the harvest to send workers out into his harvest,’ and then he invited people to follow him.”

The Kildare priest decided to put this model to people – to ask them to pray for vocations, and to ask them to invite young men to consider priesthood.

“We haven’t been ‘praying and inviting’ for the past twenty years and look where it has got us,” he said.

Illustrating this he speaks of a man he met recently. The thirty-two-year-old shared with Fr Ruairi that he had been thinking of priesthood for sixteen years.

“Who did you speak to?” Fr O’Domhnaill asked him. “Nobody.” “And what about Vocations Sunday?” The man’s answer was “I never heard a priest speak about priesthood.”

Fr O’Domhnaill consulted with two other priests, and together they came up with the names of thirty lay people from different parishes around Kildare and they invited them to be part of a vocations initiative where they would launch the appeal at Masses in every parish in Kildare and Leighlin – to pray and invite.

Fr O’Domhnaill spends his time doing the same thing the length and breadth of the counties. At the masses they distribute a leaflet containing a prayer for vocations and contact details for Fr O’Domhnaill.

When he started the work there was one student in Maynooth studying the priesthood for the diocese, and the vocations office had one ‘serious enquirer’.

Since the campaign began they have had eight men make inquiries. “It seems to be bearing fruit,” says Fr O’Domhnaill.

The plan has been to hit every church with the vocations message during March and April 2015, but the project looks set to stretch into May.

According to the thirty-strong Vocations team the response has been very positive.

Congregations generally applaud and to Fr O’Domhnaill’s surprise, his co-workers (who each originally signed up to address two parishes) are coming back and asking to do the same next year.

“I’m hoping to grow the group to sixty and send them out in the autumn again.”

In their addresses, the lay people point to the key moments in a Catholic’s life journey – marked by special sacramental moments – baptism, reconciliation, Eucharist, confirmation, marriage, and the sacrament of the sick and funeral liturgies, and ask what it will mean in practise if there are no priests into the future to administer these sacraments.

Then they appeal to the congregations to plant the idea of priesthood in the minds of men who might might have qualities suitable for a priest.

They also give out the prayer brochure. Already 7,000 of these have been distributed.

Fr O’Domhnaill insists that people have got to be inviting other people to priesthood.  As part of the Vocations campaign, the diocese is also posting a number of videos on its website: www.kandle.ie