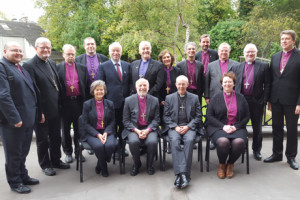 Primates and presiding bishops of the Porvoo Communion of Churches, including the Archbishop of Armagh, Dr Richard Clarke, and the Archbishop of Dublin & Glendalough, Dr Michael Jackson, at the meeting in Edinburgh. (Photo courtesy of the Scottish Episcopal Church)

The primates and presiding bishops of the Porvoo Communion of Churches have called for prayers for political leaders as they recognise the “pressure” they face in trying to reach a solution to the refugee crisis.

The church leaders made the call in a communiqué issued after their biennial meeting this week in Edinburgh as guests of the Scottish Episcopal Church.

The Porvoo Communion (of which the Church of Ireland is a member) brings together Anglican and Lutheran churches from northern Europe to “share a common life in mission and service.”

The primates and presiding bishops met under the theme of ‘Prayer, Spirituality and Pilgrimage’, and discussed issues ranging from national identity to the refugee crisis.

On refugees, the primates said in their communiqué that, “On a daily basis people risk their lives to cross the Mediterranean Sea; people walk long distances to cross into Europe because they do not have any other choice; also in parts of Europe, for example, houses have been set alight, so that refugees do not find a home; and there is a rising anxiety in some parts of Europe that democracy is being eroded by intimidation towards strangers seeking refuge and security. . .”

“We should not stand back and remain silent, but must both speak and act, remembering the words of Jesus; ‘For I was hungry and you gave me food, I was thirsty and you gave me something to drink, I was a stranger and you welcomed me’ (Matt. 25:35).”

The leaders also expressed their unanimous concern and prayers for Christians and other minority groups threatened by extinction in the Middle East.

The primates and presiding bishops recognised the pressure faced by political leaders as they sought to find a solution to the crisis; and they called for prayers for political leaders “and for those who resist the destructive calls of extremist groups that reject all support for the migrant stranger and those seeking refuge.”

“The Scottish Episcopal Church is honoured to host the meeting of the primates of the churches of the Porvoo Communion,” the Bishop of St Andrews, Dunkeld & Dunblane, the Most Revd David Chillingworth, Primus of Scotland, said.

“We have been enthusiastic members of the Porvoo Communion from the beginning of its life and we look forward to a strengthening of relationships during our meeting this week.”

The Porvoo Primates and Presiding Bishops will next meet when they gather as guests of the Evangelical Lutheran Church in Lithuania in October 2017.

Read the full communiqué from the Porvoo Communion primates and presiding bishops here.