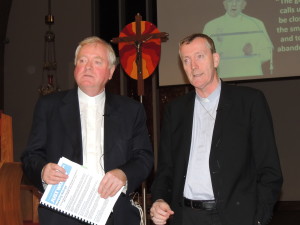 Portlaoise and surrounding parishes could take up to half a dozen Syrian refugee families.

This is according to Mgr John Byrne, the parish priest of Portlaoise, who has previously spoken out on behalf of asylum seekers in direct provision at the Montague Hotel near the town.

“There are no houses available to rent in Portlaoise,” he told the 200 or so attendees at a meeting in the parish church on Monday (7 September) night.

“There are areas of the town where they (houses) are boarded up. Could these be given to the community?” he asked showing slides of several unfinished developments.

He told CatholicIreland.net that properties which are half or three-quarters finished and boarded up can be completed because tradesmen and builders in the town are willing to work voluntarily to complete them, and other people want to welcome and to befriend any Syrian families that come.

Bishop Denis Nulty of Kildare and Leighlin also spoke at the meeting and highlighted the importance of using the right words to make people aware of the plight of the Syrian refugees.

“Migrants are people who move from one country to another. Refugees flee and bring nothing with them. Refugees are skilled nurses, doctors, dentists, teachers,” he said and added that such people can only enrich Ireland when they arrive, all they need is a start.

He said he was very proud of all the people who turned up to offer their help to refugees as part of the Portlaoise parish initiative.

A committee has been set up to progress the location and preparation of housing for families.

This was the first parish meeting of this diocese since the Pope called for every parish to house a refugee family, although the meeting was planned before the Pope made his appeal.

Co Laois has already hosted 13 refugee families and among them are Syrian families.

Two brothers Osama and Amro Abouhajar from Syria and Patricia Murambinda from Zimbabwe were present at the meeting.

Also present was Fr Liam Merrigan, parish priest of Monasterevin, and the first two Syrian refugees to arrive in his parish, mother and daughter Mena and Amal.

He told the meeting that little is known in the town about the planned intake of up to 70 Syrian refugees in the Hazel Hotel and this lack of information is causing fear.

His parish hopes to soon host a meeting to inform the public and to seek help for the refugees. 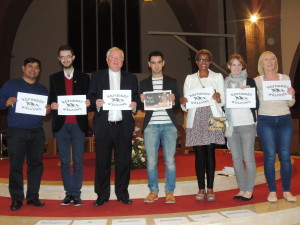 Mgr Byrne also expressed concern that the Hazel Hotel might become another direct provision system where people spend years rather than weeks before moving to homes in parishes and communities around Ireland.

“The direct provision system has been on our minds for some time, it is not fit for purpose. It is something that we would want to move away from I would hope that this new wave of sympathy towards refugees might result in it becoming higher on the political agenda than it is. It is no way to treat people and we can’t stand over it,” he told CatholicIreland.net.

He said Ireland celebrates the centenary of 1916 next year and that “a Republic that treats visitors to our shores the way we do in the direct provision centres cannot be living up to the ideals of the proclamation or the foundation of our Republic.”

At the Portlaoise meeting many people signed up to help for example with conversation and English lessons and many other practical tasks that might help refugees to settle into the parish and community.