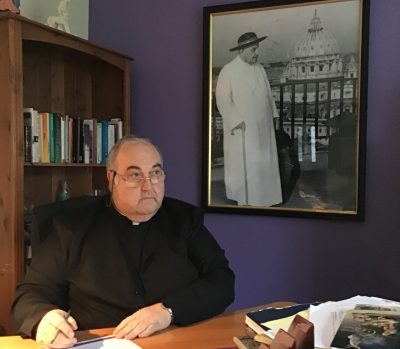 A well-known Dublin parish priest has hit out at the negative portrayal of members of the Religious Sisters of Charity, suggesting that it is unfair.

The Religious Sisters of Charity is the congregation that owns St Vincent’s Hospital in Dublin.

Fr Joe McDonald, author of the book Why the Irish Church Deserves to Die, explained, “Some of the stuff that is going on at the moment about the Sisters of Charity and St Vincent’s Hospital drives me nuts.”

Speaking to CatholicIreland.net, he challenged those who have portrayed the Sisters in a uniformly negative light: “Are you seriously telling me that all these Sisters were all evil psychopaths?”

He added, “That is not my experience.”

A former member of the Christian Brothers, Fr McDonald now ministers in the disadvantaged Dublin parish of St Matthew’s in Ballyfermot.

“I lived in religious life for 25 years and I lived with a few sad sick individuals and I lived with saints. Most of them, like myself, weren’t sad or sick or saints – they were people struggling with their own fragility to try and live out their vocation as best they can.”

His defence of the Religious Sisters of Charity echoes comments made by Sr Stanislaus Kennedy to The Tablet.

Sr Stan, who joined the Religious Sisters of Charity in 1958 and is the founder of homeless charity Focus Ireland, expressed disappointment over the negativity towards her congregation over its ownership of St Vincent’s Hospital in Dublin and a Magdalene laundry in Donnybrook in the past.

“The negativity is directed at nuns. Everything is thrown together, the orphanages, the Magdalene homes, the Tuam babies, Vincent’s hospital – it is all thrown together and mixed up and it is all anti nuns,” Sr Stan said.

“Things happened which were not right and of course they should be exposed. I also know that great things happened, and I know nuns who did extraordinary work. I couldn’t hold a candle to them – they worked day and night.”

Fr McDonald, a survivor of clerical abuse, told CatholicIreland.net his “rage has moved from the rage of the damaged and the broken to that of a wounded pastor” who rages about what is happening in 2018, not what happened in 1969.

Of his meeting with Pope Francis at the Papal Nunciature on 25 August last, he explained, “I did not go looking for healing; I did not go to accuse the Pope or to dump the pain of my past on the Pope or to hold him responsible. I wanted to speak to the Pope about a Church that is dying and the reform that is needed in the Irish Church. He asked me about my life experience and I did tell him. He also wanted to know where my rage was.”

While ministering in Ballyfermot, where he has set up the Roncalli reform movement, Fr McDonald met some of the men who as children were abused by the notorious paedophile priest, Tony Walsh.

“I would have quite a large number of people come to my door over the course of a week, mostly men between 20 and 35. Some of them were direct victims of Tony Walsh.

“Tony Walsh really destroyed their lives. They ended up in addiction, they ended up homeless on the street.

“I have had situations where a couple of those guys have died, and their family have come to me and said, ‘Father, he was very specific; he wanted you to do some sort of a funeral, but he could not tolerate the idea of his body being in the church.’ So, they were caught. They wanted some sort of recognition of his life and of his goodness and that he was gone to God. But I couldn’t do a traditional funeral for him. The Church regulation would say I couldn’t do that, but I made exceptions in those cases – and I have been criticised for it.”