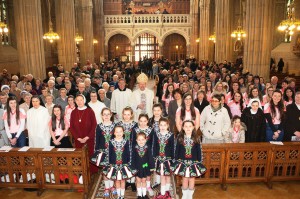 A packed Cathedral for the Mass for Consecrated Life and launch of Rise of the Roses
St Patrick’s Cathedral Armagh
1 February 2015
Credit: LiamMcArdle.com

The Primate of All Ireland, Archbishop Eamon Martin, has welcomed Pope’s Francis’ letter on the work of the Pontifical Commission for the Protection of Minors which abuse survivor Marie Collins is a member.

The Pontiff addressed his letter to the Presidents of Episcopal Conferences and Superiors of Institutes of Consecrated Life and Societies of Apostolic Life and urged them to offer “close and complete cooperation” with the Commission.

Recalling his meeting last July with those who had suffered sexual abuse by priests, the Pope said he was “deeply moved by their witness to the depth of their sufferings and the strength of their faith”.

The letter, which was released on Thursday, continued “This experience reaffirmed my conviction that everything possible must be done to rid the Church of the scourge of the sexual abuse of minors and to open pathways of reconciliation and healing for those who were abused.”

“Families need to know that the Church is making every effort to protect their children,” the Pope underlined and added, “They should also know that they have every right to turn to the Church with full confidence, for it is a safe and secure home. Consequently, priority must not be given to any other kind of concern, whatever its nature, such as the desire to avoid scandal, since there is absolutely no place in ministry for those who abuse minors.”

The Pope added, “Every effort must also be made to ensure that the provisions of the circular letter of the Congregation for the Doctrine of the Faith dated 3 May 2011 are fully implemented.”

“This document was issued to assist episcopal conferences in drawing up guidelines for handling cases of sexual abuse of minors by clerics. It is likewise important that episcopal conferences establish a practical means for periodically reviewing their norms and verifying that they are being observed. It is the responsibility of diocesan bishops and major superiors to ascertain that the safety of minors and vulnerable adults is assured in parishes and other Church institutions.”

Responding to the letter, Archbishop Martin said he looked forward to discussing the letter’s importance with the other members of the Irish Episcopal Conference at its next meeting.

Referring to the Pope’s statement that, “Families need to know that the Church is making every effort to protect their children,” Archbishop Martin said the National Board for Safeguarding Children in the Catholic Church in Ireland has been working with dioceses, religious congregations and missionary societies to ensure that there are in place robust and fair procedures in relation to child safeguarding.

“The commitment of volunteers in parishes and Church organisations throughout the country is a vitally important part of the Church working to build up a culture of credible safeguarding practice. It is my hope that the newly-established Pontifical Commission for the Protection of Minors will continue to build up and enhance this good work,” he said.