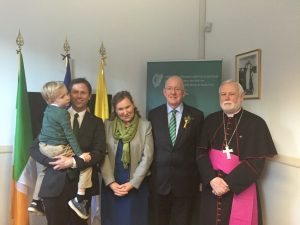 The Minister for Foreign Affairs and Trade has reiterated that Ireland will welcome Pope Francis to visit for the World Meeting of Families in 2018.

“This will be another landmark moment and one that will be of huge importance to so many Irish people,” said Minister Charlie Flanagan. “We will support it however appropriate.”

The Minister formally opened the Embassy of Holy See Chancery on St Patrick’s Day 2017. He also had a private meeting with Archbishop Gallagher, the Holy See secretary for relations with states at the Vatican.

Ireland’s Embassy in the Vatican was closed in 2011 when the then Foreign Affairs Minister Eamon Gilmore said it was necessary to cut costs. It also came in the wake of the publication of several reports on clerical abuse of children, including the Murphy and Cloyne reports in 2009 and 2011 respectively.

The embassy was reopened and in May 2014 the new Ambassador Emma Madigan was appointed. Minister Flanagan said that Ireland’s embassy network is a vital asset for a small country in a rapidly changing global environment. Embassies help with international cooperation and trade, raising Ireland’s profile, and that of its people and culture. They are central in making new allies and partners, informing foreign policy, promoting Irish values and defending national interests. 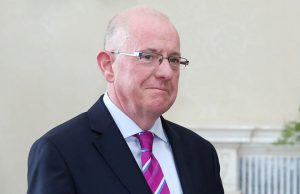 This was in contrast to the former Minister Eamon Gilmore’s assertion that the embassy to the Vatican yielded no economic return. Minister Flanagan said that the Holy See stands at the centre of a global faith community of well over a billion people.

“Pope Francis is a voice unlike any other. He has used that voice fearlessly in challenging the world to vindicate human dignity and human rights, eradicate poverty and hunger, tackle climate change, end conflicts, support sustainable development and to stand up for the values we all hold,” said the Minister.

Ireland and the Holy See have some different perspectives and at times will have “difficult conversations”, but will also have many fruitful conversations about shared values, he added.

While today’s Ireland is characterised by pluralism, the deep historic faith means that the Church has a place in Irish life well beyond formal diplomatic relations.

He praised the embassy for honouring the life and work of Irish people who have left their mark on the world through the Church and inspired by their faith. These range from St Columbanus to Monsignor O’Flaherty to the missionaries working in South Sudan and other areas of conflict today.

“Ireland’s missionary tradition is interwoven with the history of our global connectedness and our diaspora. It is part of who we are,” he concluded.

He thanked everyone present for marking what he called an important moment in the relationship between Ireland and the Holy See. Those present included Archbishop Paul Gallagher, and Ireland’s Ambassador to the Holy See Emma Madigan, her husband Laurence Simms and their son Cormac.

The Minister also visited the Irish College in Rome during his trip.