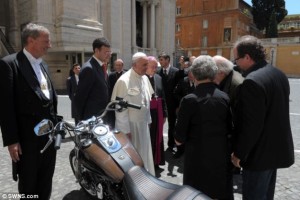 Pope Francis is presented with his Harley-Davidson Dyna Super Glide.

A brand new 1,585cc Harley-Davidson Dyna Super Glide which was presented to Pope Francis last June is to be auctioned to raise funds for charity.

The motorbike was signed on the tank by Pope Francis at a special ceremony at the Vatican in November. It is also offered with a certificate of conformity from Harley-Davidson.

Funds raised by the sale will go towards the renovation of the Caritas charity’s Don Luigi di Liegro hostel and soup kitchen based at Rome’s Termini railway station.

The hostel opened 30 years ago to help the homeless, jobless and the poor, and the money raised by the Harley-Davidson sale will allow it to continue to provide food and accommodation to more than 1,000 people in need every day.

Bonhams at the Grand Palais has been given responsibility for the auction on the super bike on 6 February 2014.

Ben Walker, head of motorcycles at Bonhams, said: “We are incredibly honoured to be selling this item on behalf of Caritas Roma. We hope to be able to do both Pope Francis and Harley-Davidson proud by raising a significant amount of money for a very worthy cause.”

The Harley-Davidson will be sold on 6 February 2014 as part of Bonhams’ Les Grandes Marques du Monde sale at the Grand Palais in Paris.

The motorcycle was a gift given to the Pontiff from the iconic American company to celebrate its 110th anniversary at a biker rally in Rome.

The Pope donated it to Caritas to raise money to restore Rome’s Don Luigi hostel.

According to the ANSA news agency there is some speculation that the Harley Davidson company will buy it back to add to its museum.