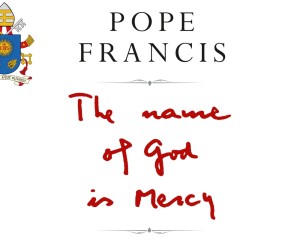 Pope Francis’ first book, The Name of God Is Mercy, went on sale in Ireland this week.

The hardback edition is available in branches of Eason’s nationwide priced €18.99. Veritas says it should have the book in stock by next week.

The Name of God is Mercy was published simultaneously in eighty-six countries on Tuesday of this week.

The cover of the Italian, Spanish, French, English and Portuguese editions, bears the signature of the Pope.

It’s nine chapters begin with ‘The Time of Mercy’ and conclude with ‘How to live the Jubilee well’.

The book arose from a forty-hour long interview the Pope gave Tornielli over the summer months of 2015.

The journalist put forty questions to Pope Francis all linked to the theme of mercy,  described by the Pope as “God’s identity card”.

In the book, Pope Francis explains his papal motto ‘Miserando atque eligendo’, (Lowly but Chosen), which he had already taken as bishop, through a story from his teenage years.

“I don’t have any particular memories of mercy as a young child. But I do as a young man. I think of Father Carlos Duarte Ibarra, the confessor I met in my parish church on September 21, 1953. I was seventeen years old. On confessing myself to him, I felt welcomed by the mercy of God.” 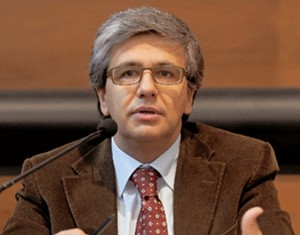 “Ibarra was originally from Corrientes but was in Buenos Aires to receive treatment for leukaemia. He died the following year.”

“I still remember how when I got home, after his funeral and burial, I felt as though I had been abandoned. And I cried a lot that night, really a lot, and hid in my room.”

“Why? Because I had lost a person who helped me feel the mercy of God, that miserando atque eligendo, an expression I didn’t know at the time but I eventually would choose as my episcopal motto.”

“I learned about it later, in the homilies of the English monk, the Venerable Bede [672-735]. When describing the calling of Matthew, he writes: ‘Jesus saw the tax collector and by having mercy chose him as an apostle saying to him, ‘follow me’.”

“This is the translation commonly given for the words of Saint Bede [originally written in Latin]. I like to translate “miserando” with another gerund that doesn’t exist: misericordando or mercying. So, “mercying him and choosing him” describes the vision of Jesus who gives the gift of mercy and chooses, and takes with him.”

In his book, Pope Francis says the Church condemns sin because “it has to relay the truth: ‘this is a sin’.”

But at the same time, he continues, it embraces the sinner who recognises himself as such, “it welcomes him, it speaks to him of the infinite mercy of God. Jesus forgave even those who crucified and scorned him.”

The Church does not exist to condemn people, he says “but to bring about an encounter with the visceral love of God’s mercy”.

For this to happen “it is necessary to go out: to go out from the churches and the parishes, to go outside and look for people where they live, where they suffer, and where they hope.”

But a yes to mercy is not a yes to corruption, says Pope Francis.

“The corrupt man tires of asking for forgiveness and ends up believing that he doesn’t need to ask for it any more. We don’t become corrupt people overnight. It is a long, slippery slope that cannot be identified simply as a series of sins.”

“One may be a great sinner and never fall into corruption if hearts feel their own weakness. That small opening allows the strength of God to enter.”