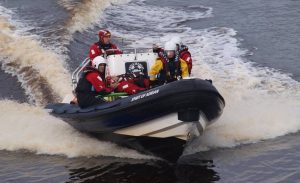 One of the cars used by the Pope when he was in Ireland has been donated to the Derry-based charity Foyle Search and Rescue, which combines suicide prevention services with rescue operations run in conjunction with the police and the RNLI.

As part of its suicide prevention activities, Foyle Search and Rescue volunteers patrol the river on Thursday, Friday and Saturday nights (identified peak times of need) from 9.30 p.m. to 3.00 a.m., engaging with people in distress and providing what comfort and support they can.

The chairman of the service, Stephen Twells, said he was speechless when he heard the good news about receiving the almost brand-new Skoda Rapid, one of two used by Pope Francis while he was in Ireland. He said that the organisation was “very honoured and most appreciative to be the recipients of this very kind gift. Pope Francis’ car will provide a morale boost to our volunteers at this time, during what has been a very tough year for all of us in the city. 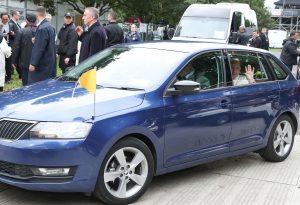 “I am also aware that this gift will be a great comfort to many families here in Derry knowing that we have been recognised by the Holy Father, and by Archbishop Martin, for the work that we do.”

The Pope used two Skoda Rapid vehicles while he was in Ireland. The first of these was donated to Crosscare, the social services arm of the Dublin Archdiocese, at the suggestion of Archbishop Diarmuid Martin, who also decided that the Primate of All Ireland, Archbishop Eamon Martin of Armagh, should have the honour of deciding what organisation should benefit from the donation of the second car. The Northerner nominated Foyle Search and Rescue.

Dr Eamon Martin said he had good reason for suggesting that the Derry-based rescue service be the beneficiary. “From my time as a priest ministering in Derry, I know well at first-hand how the local Foyle Search and Rescue volunteers work selflessly, and in their own free time, each week to help those who are vulnerable and in need. Critically, the volunteers save human lives.

“I also wish to avail of this opportunity to commend the exemplary volunteers who provide an educational programme on water safety and suicide awareness to local schools, workplaces and community groups. In addition, Foyle Search and Rescue facilitates the North West Bereaved by Suicide Support Group which assists families and friends who have lost a loved one to suicide. May God continue to bless these local heroes in their work.”