Pope Francis highlights environment in US 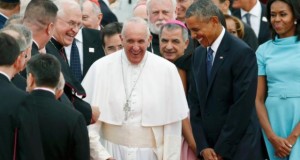 Pope Francis arrives in the US and is greeted by President Barack Obama. Pic courtesy: IrishTimes.com

Addressing President Barack Obama and other US political and religious representatives on the lawn of the White House on Wednesday, Pope Francis warned that, “Climate change is a problem which can no longer be left to a future generation.”

In his address in English, the Pope told President Obama that the world was at a “critical moment” when it is still possible to make the necessary changes, but these must be acted on quickly.

“Such change demands on our part a serious and responsible recognition not only of the kind of world we may be leaving to our children, but also to the millions of people living under a system which has overlooked them,” he said.

Calling on Americans to build a truly tolerant and inclusive society, he referred to his own background as the “son of an immigrant family” in a country “largely built” by immigrant families.

Elsewhere in his address to over 15,000 people at the White House, the Pontiff called for a society which safeguards individual rights and rejects “every form of unjust discrimination”.

The US bishops’ concerns over religious freedom prompted the Pope to call for respect for the deeply held religious beliefs of citizens.

The Church leadership in the US has objected to the Administration’s efforts through Obamacare to force almost all employers, including Catholic institutions, to fund contraception coverage in health insurance policies.

President Obama, in his address spoke about the persecution of Christians for their beliefs around the world.

The Pope and President Obama spoke about efforts to normalise relations between the Cuba and America after more decades of tension.

“The efforts which were recently made to mend broken relationships and to open new doors to cooperation within our human family represent positive steps along the path of reconciliation, justice and freedom,” Pope Francis told the US president.

In return, President Obama told him, “Holy Father, we are grateful for your invaluable support of our new beginning with the Cuban people, which holds out the promise of better relations between our countries, greater cooperation across our hemisphere and a better life for the Cuban people.”

On Wednesday, Pope Francis also canonised the 18th-century Spanish missionary, Blessed Junipero Serra, during a Mass outside the Basilica of the National Shrine of the Immaculate Conception in Washington.

The canonisation has been criticised by some over Junipero Serra’s treatment of the native peoples of California and the impact of Spanish colonisation on native peoples throughout the Americas.

In his homily, Pope Francis stated, “Junipero sought to defend the dignity of the native community, to protect it from those who had mistreated and abused it. Mistreatment and wrongs, which today still trouble us, especially because of the hurt which they cause in the lives of many people.”

In his address to the US bishops at a midday prayer service at St Matthew’s Cathedral in Washington, the Pope told them that the crimes of sexual abuse of children by priests and religious should never be repeated.

“I know how much the pain of recent years has weighed upon you, and I have supported your generous commitment to bring healing to victims … and to work to ensure that such crimes will never be repeated,” he stated.