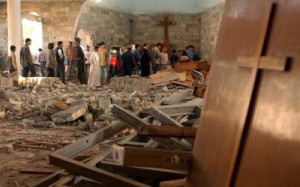 Pope Francis has written a pre-Christmas letter to Christians in the Middle East to express his closeness to them at a time of “afflictions and tribulations” due to “the continuing hostilities in the region, but especially because of the work of a newer and disturbing terrorist organisation.”

Though the Pope does not refer to the organisation by name, Islamic State militants in recent months have forced hundreds of thousands of Christians, Yazidis and other minorities from their homes and villages in Iraq.

The Pope, who says he follows daily reports of the “enormous suffering endured by many people in the Middle East,” describes the organisation “of previously unimaginable dimensions,” responsible for “all kinds of abuses and inhuman acts.”

Christians were “brutally driven out of their native lands,” he observes, where they “have been present since apostolic times.”

The Holy Father says he was moved to write to them ahead of Christmas, knowing that their Christmas hymns would be accompanied “by tears and sighs.”

He writes that he cannot remain silent in the face of persecution and conflict affecting other religious and ethnic groups. He is particularly concerned about the children, mothers, elderly, homeless and refugees as they face the prospect of a harsh winter.

The Holy Father expresses hope that the current trials to which Christians are subjected will strengthen them in their faith and in communion with Christians of other denominations.

He praises those pastors who have braved times of trouble to remain by their flock and recalls those kidnapped, including several Orthodox bishops and priests.

He also expresses gratitude for the good relations and cooperation between Orthodox Church leaders and those of eastern rite Catholic churches.

The sufferings which Christians endure,” he adds, “contribute immensely to the cause of [Christian] unity.”

Interreligious dialogue marked by openness, truth and love, he says, is the best antidote to religious fundamentalism, “a threat to followers of every religion.”

Living in predominantly Muslim nations, the region’s Christians can help their fellow Muslims present a “more authentic image of Islam,” the Pope writes, “as so many of them desire.”

Christians, he emphasises, can reiterate that Islam is a religion of peace, compatible with respect for human rights and peaceful coexistence.

The tragic situation of the Christians, Yazidis and other minorities in Iraq, the Pope stresses, “demands that all religious leaders clearly…condemn these crimes unanimously and unambiguously” and “denounce the practice of invoking religion in order to justify them.”

At the same time, as natives to the region, Christians “have the duty and the right to take full part in the life and progress of their nations,” writes Pope Francis.

They are called to be artisans of peace, reconciliation and development, to promote dialogue,” he says, to build bridges and cooperate with “all national and international authorities.”

He invites young people to “not be afraid or ashamed to be a Christian,” and tells the elderly they are the “memory” of their peoples which like a seed, can grow and benefit future generations.

He expresses admiration for Caritas and other Catholic charitable and educational organizations, saying they contribute to peace in a region hungry for it.

Pope Francis says he continues to urge the international community to help meet their needs and those of other suffering minorities and to seek peace through negotiation and diplomacy.

Calling for prayers that they will one day be able to return to their homes and “to live in dignity and security,” Pope Francis says Christians in the Middle East have “an enormous responsibility” but assures them they are not alone.

He underlines that he is here to encourage them and let them know how precious is their presence and witness. And, he hopes to one day come visit them in person, to comfort them.