Pontiff prayed in silence in the symbolic cemetery which is dotted with hundreds of small white crosses. 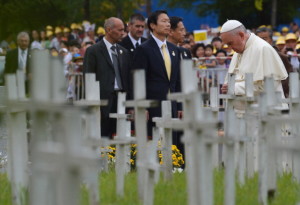 Pope Francis made a special visit to a garden memorial where aborted babies are commemorated in Korea’s Kkottongnae following his visit to the ‘House of Hope’ rehabilitation centre on Saturday afternoon.

The Pope prayed in silence in the symbolic cemetery which is dotted with hundreds of small white crosses representing the aborted children.

The papal visit to the ‘Cemetery for Aborted Children’ in Kkottongnae followed the Pontiff’s meet and greet in the ‘House of Hope’ where he embraced the disabled and greeted teachers and health workers.

About 150 adult patients and 50 children with disabilities were present at the centre, as well as roughly 70 health workers and educators.

The Kkottongnae centre cares for around 3,000 elderly or disabled people.

Some commentators had objected to the Pope visiting this centre because they said it was an old fashioned institution that keeps large numbers of people with disabilities hidden and separated from wider society while more recent pastoral practice endeavours to integrate them more.

However, the images of Pope Francis meeting 50 or so delighted children and young adults with physical and mental disabilities were televised across the country and brought a powerful message to a society which often still views disability as something shameful.

During his visit Pope Francis gave a mosaic entitled ‘Nativity’ to the centre. Designed by Emanuela Rocchi, the Holy Family is depicted in a star, at the bottom of which a crowd of pilgrims make their way to worship the Christ child.