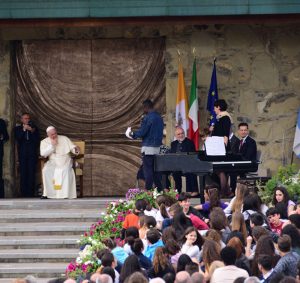 At 9.55 Italian time yesterday, the papal helicopter touched down in Loppiano, a small town of 850 inhabitants near Florence in Northern Italy. History was being made as, for the first time ever, a pontiff visited the Focolare’s flagship “little town of witness”.

Doing the honours to meet the Pope was Maria Voce, the movement’s President. Joining the inhabitants yesterday came another 6,000 or so friends and people from the locality.

Sally McAllister from Belfast, who manages the international performing group Gen Verde based at Loppiano, told CatholicIreland that the visit was absolutely extraordinary. “From just after 6.00am people were walking – literally thousands of people walking along the road. It seemed to be something quite biblical, all these pilgrims coming to see the Pope. The general atmosphere before his arrival was very joyful.”

The Pope got into the back of a small car and drove the short distance to the Maria Theotokos church, the centre-point of Loppiano. After greeting several bishop “friends ”of Focolare, he said a brief prayer in the church, before taking up his position centre stage to joyful applause.

Introducing the town of Loppiano, Maria Voce told the Pope that Chiara Lubich (Focolare founder) had always wanted to see little towns come about which would be like laboratories of human interaction and mini united worlds.

“This is what Loppiano wants to show to the world,” she said. Currently, 850 people from 65 countries live in the small town – families, religious, young people preparing to enter the Focolare communities, other students and lay people who worked in society, for example, in the Economy of Communion business park.

A further 35,000 people visit Loppiano each year. “We want to be able to say to everyone: ‘Come and see’ so they experience that having mutual love as the foundation for living together leads to Gospel joy and the writing of a ‘new page in history’.” 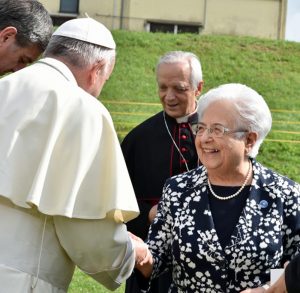 The Pope then answered some questions. “Pioneers ”of the town, which began in 1964, spoke of the lessening of enthusiasm over time and how hard it was to find the right way to incarnate the initial prophecy. Thanking them for what they had done, Pope Francis said faith allows Jesus to work. “It makes room for Jesus and he does miracles, one after another.”

The Pope recommended them to “remember the early days” as Paul said. “Don’t abandon your forthrightness. You just need to persevere – because by doing the will of God you will obtain what has been promised to you.”

There are fruits because the tree has roots, said the Pope, but “if you don’t have memories, you are uprooted and there will not be fruits”.

He told those present to have the courage to “fight with God in prayer” like Abraham, and in their relationships within the community to be always “sincere, open, frank”. He warned against sowing discord through gossip. Gossips are “terrorists”, he said.

In answer to a question on education, Pope Francis said there was a need for education and training in three languages: the head, the heart and the hands. “We need to learn to think well, feel well and work well. You think what you feel and do, you feel what you think and do, and you do what you feel and think, in unity, this is education.”

The official name for the Focolare movement is “Work of Mary”. At the end of his talk, the Pope spoke of Mary as the first disciple, who was a lay woman. “There is a great inspiration here.” He advised those present to think about how Mary reacted in the moments of conflict in the life of Jesus. “And imagine, how would Mary have reacted to this? This is a real school to help [us] going forward. Because she is the woman of faithfulness, of creativity, of courage. Always look at this lay woman. She will help you a lot.”

“He spoke in such a beautiful way about Mary,” commented Sally McAllister, “and the fact that Mary was a lay person and so he was underlying the lay vocation in the Church.”

At the end of his talk, the Pope met several people, including a group of Buddhist monks from Thailand, a rabbi and a group of his fellow countrymen and women.