To shake off its malaise, he said, Europe needs to recover a sense of values and mission, one foundation for which is religious conviction. 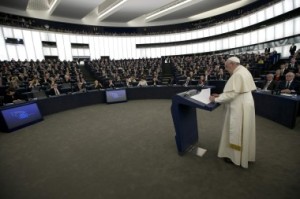 History’s first pope from outside the West travelled to the heart of secular Europe on Tuesday and delivered a sharp wake-up call, warning European leaders that the continent risks irrelevance if it doesn’t recover its founding values, drawing in part on its Christian legacy.

Pope Francis delivered back-to-back speeches to the European Parliament and the Council of Europe that amounted to a strong call to Europe to get both its social and its spiritual house in order.

Before roughly 750 members of the European parliament, Francis bluntly said today’s world is becoming “less and less Eurocentric,” that Europe often comes off as “elderly and haggard,” that it’s less and less a “protagonist” in global affairs, and that the rest of the planet sometimes sees it “with mistrust and even suspicion.”

“Where is your vigour?” Francis asked the Council of Europe, deliberately speaking through it to the entire continent. “Where is that idealism that inspired and ennobled your history?”

Despite being on the ground just four hours, Francis’ presence seemed historic since, in a sense, the New World was meeting the Old Continent.

Speaking in Italian, Francis argued that many of the specific political problems facing Europe, from immigration and extremism to rising youth unemployment, have a spiritual core.

He denounced what he called a “cult of opulence which is no longer sustainable,” based on exaggerated individualism that breeds violations of human dignity.

To shake off its malaise, he said, Europe needs to recover a sense of values and mission, one foundation for which is religious conviction.

“A Europe which is no longer open to the transcendent dimension of life,” Francis said, “is a Europe which risks losing its own soul.”

Francis said that despite his sober diagnosis, he wanted to deliver a message of “hope and encouragement” that Europe can dust off its original vision, based on the post-World War II founders of the European Union who were often inspired by Christian ideals, including the social teaching of the Catholic Church.

Tuesday’s brief day trip had been billed as the pontiff’s chance to lay out a vision for Europe and he didn’t disappoint, delivering two of the most substantive speeches of his papacy in a span of less than four hours.

The European Parliament is the lone institution whose members are directly elected by the 500 million citizens living in 28 member states of the European Union, while the Council of Europe brings together 47 countries whose combined population is more than 800 million. Francis’ appearance marked the second time a pontiff has addressed these two institutions, after John Paul II in 1988.

Heading into the trip, Francis was expected to engage the hot-button questions facing Europe’s political class: rising immigration and youth unemployment, gains posted in May by far-right nationalistic movements, and backlash against austerity measures imposed by many governments as part of the ongoing Eurozone crisis.

The pope did raise several such issues. On hunger, for instance, the pontiff said “it is intolerable that millions of people around the world are dying … while tons of food are discarded every day from our tables.”

On labour, Francis said “the time has come to promote policies which create employment,” and to “restore dignity to labour by ensuring proper working conditions.”

“A Europe which is no longer open to the transcendent dimension of life is a Europe which risks losing its own soul.””

“What dignity can a person ever hope to find,” the pope asked the parliament, “when he or she lacks food and the bare essentials for survival, and worse yet, when they lack the work that confers dignity?”

Some of the pope’s most passionate language came in a call for “fair, courageous and realistic” immigration policies, especially on behalf of waves of poor migrants from Africa and the Middle East who often try to reach Europe by making perilous crossings over the Mediterranean Sea.

“We cannot allow the Mediterranean to become a vast cemetery!” the pope said, referring to the estimated 20,000 people who have died over the past two decades attempting to make the journey.

As other victims of what Francis once again denounced as a “throw-away culture,” Francis cited “the terminally ill, the elderly who are abandoned and uncared for, and children who are killed in the womb.”

Francis also delivered a strong ecological message, saying “our earth needs constant concern and attention” and insisted that it must not be “disfigured, exploited and degraded.”

Francis took up one of the standard complaints lodged against European political institutions, which is that they suffocate diversity under a bland bureaucratic uniformity. Resentments along those lines have been credited with fuelling the rise of far-right Euro-sceptic parties, including the National Front in France and the “Five Star” movement of comedian Beppe Grillo in Italy.

“Unity does not mean uniformity of political, economic, and cultural life, or ways of thinking,” the pope said. “Indeed, all authentic unity draws from the rich diversities which make it up.”

On most of those points, the pope drew strong applause. The heart of his argument, however, seemed to cut deeper than a laundry list of specific political concerns.

Francis rued what he called a “great vacuum of ideals which we are currently witnessing in the West,” including “forgetfulness of God.” In place of a humanistic vision, he said, what Europe breeds today are “uniform systems of economic power at the service of unseen empires.”

Francis insisted that recovering Europe’s Christian history and entering into “meaningful” and “open” dialogue with its religious traditions “does not represent a threat to the secularity of states, or to the independence of the institutions of the European Union.”

Instead, he said, it’s the basis for “a humanism cantered on respect for the dignity of the human person.”

The 2,000-year history that links Europe and Christianity, he said, “isn’t free of conflicts and errors, even sins,” but at its best, it’s driven by “the desire work for the good of all.”

Francis’ predecessor, Pope Benedict XVI, was often accused of being “Eurocentric,” in the sense of focusing excessively on European culture. To date, Francis has faced the opposite charge, often being seen as neglectful of Europe in favour of focusing on zones of greater growth and dynamism for the Catholic Church today, such as Asia and Africa.

Yet Francis’ twin speeches on Tuesday suggested that substantively he’s got much the same agenda for Europe as his two predecessors, and both texts frequently cited John Paul II and Benedict XVI.

In fact, his Strasbourg speeches were arguably the most “Ratzingerian” texts of Francis’ papacy, featuring references and vocabulary often associated with Pope Benedict: The risks of “dictatorships of relativism,” as well as a philosophical tendency to see human beings as radically isolated “monads.”

In other words, this may have been a pope from the New World, but the message for the Old Continent hasn’t changed: If Europe wants to save its soul, it needs to make room for values inspired in part by its Christian past.