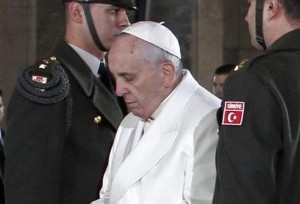 The Popelays a wreath at the tomb of Turkey’s founder, Kemal Ataturk

Freedom of religion and freedom of expression help friendship to flourish and become eloquent signs of peace, Pope Francis said yesterday on the first day of his apostolic visit to Turkey.

“It is essential that all citizens – Muslim, Jewish and Christian – both in the provision and practice of the law, enjoy the same rights and respect the same duties.”

“They will then find it easier to see each other as brothers and sisters who are travelling the same path,” he told authorities gathered at the Presidential Palace at Ak Saray.

“The Middle East, Europe and the world all await this maturing of friendship,” the Pontiff said.

“We must not resign ourselves to ongoing conflicts as if the situation can never change for the better! With the help of God, we can and we must renew the courage of peace!”

“Fanaticism and fundamentalism, as well as irrational fears which foster misunderstanding and discrimination, need to be countered by the solidarity of all believers,” he said.

He suggested that solidarity rested on four pillars: respect for human life, respect for religious freedom, commitment to ensuring what each person needs for a dignified life and care for the environment.

Sadly, to date, we are still witnessing grave conflicts he said, naming Syria and Iraq as places where “prisoners and entire ethnic populations are experiencing the violation of the most basic humanitarian laws.”

“Grave persecutions have taken place in the past and still continue today to the detriment of minorities, especially – though not only – Christians and Yazidis. Hundreds of thousands of persons have been forced to abandon their homes and countries in order to survive and remain faithful to their religious beliefs,” Pope Francis commented.

Complimenting Turkey on its generosity in welcoming refugees, he said the international community had the “moral obligation” to assist the country in taking care of these refugees.

Turkey is currently home to at least 1.6 million people from Syria, most of them living close to the border.

Turning to the cause of the tragedies, the Pope affirmed that while it is “licit” (while always respecting international law), to stop an unjust aggressor, he believed the problem could not be resolved “solely through a military response”. 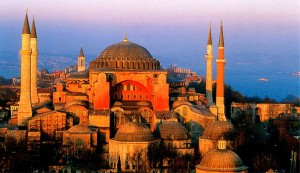 “What is required is a concerted commitment on the part of all, based on mutual trust, which can pave the way to lasting peace, and enable resources to be directed, not to weaponry, but to the other noble battles worthy of man: the fight against hunger and sickness, the promotion of sustainable development and the protection of creation, and the relief of the many forms of poverty and marginalisation of which there is no shortage in the world today.”

The Pope arrived at 1pm local time yesterday in the Turkish capital of Ankara, and amidst tight security, held a meeting with President Recep Tayyip Erdogan at his newly constructed 1,000-room presidential palace before addressing civil authorities present at the palace.

Today Pope Francis travels to Istanbul where he is due to visit Istanbul’s Hagia Sophia, a Byzantine-era church that was turned into a mosque after the conquest of Constantinople in 1453 and now serves as a museum, and the Ottoman-era Sultan Ahmet mosque, also known as the Blue Mosque.

He is also due to sign a joint declaration with the Ecumenical Patriarch Bartholomew I, the leader of 300 million Orthodox Christians, on trying to bridge the divides between Catholicism and Orthodox Christianity.

On Sunday Pope Francis is to join in the celebration of Saint Andrew with the Greek Orthodox Church.