Home > News > Pope will be told of concerns over Chilean bishop

Pope will be told of concerns over Chilean bishop 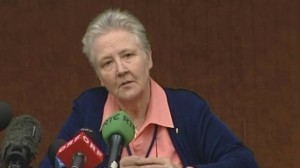 Members of the Vatican’s commission for the protection of minors, including Irish clerical abuse survivor, Marie Collins, met top officials in Rome on Sunday evening to protest against the appointment of a Chilean bishop who is accused of covering up child abuse by a priest.

The four lay members of the Pontifical Commission for the Protection of Minors that met the Commission President, Cardinal Sean O’Malley, asked him to convey their dismay to Pope Francis over the choice of Juan de la Cruz Barros Madrid as bishop of the diocese of Osorno.

In a statement issued on Monday, Marie Collins, Peter Saunders, Dr Catherine Bonnet, and Baroness Sheila Hollins said, “Although we are not charged with dealing with individual cases, the protection of minors is our primary concern.”

“The process of appointing bishops who are committed to, and have an understanding of child protection, is of paramount importance.”

“In the light of the fact that sexual abuse is so common, the ability of a bishop to enact effective policies, and to carefully monitor compliance is essential. Cardinal O’Malley agreed to present the concerns of the subcommittee to the Holy Father.”

Bishop Juan de la Cruz Barros Madrid’s installation ceremony in March was marred by angry protests in Chile by those who believe he witnessed Fr Fernando Karadima abuse Juan Carlos Cruz and did nothing about it.

Cruz has also alleged that Barros, as secretary to Cardinal Juan Francisco Fresno, destroyed letters from other victims of Fr Karadima.

Speaking to CatholicIreland.net from Rome, Marie Collins said on Sunday that the four commission members, who also include UK clerical abuse survivor, Peter Saunders, believe Bishop Barros doesn’t have a proper understanding of child protection or what constitutes abuse.

“Our concern is, if he [Barros] didn’t realise that what was happening was abuse, then his understanding of abuse is adequate and he shouldn’t really be running a diocese where he has to protect children and minors in that diocese.”

She added that his selection and the support expressed for him in a letter issued by the Congregation for Bishops in the Vatican and by the Chilean bishops’ conference would seem “contrary to what we have been told about the care that is going to be taken about these sorts of appointments”.

“Their inquiries didn’t involve talking to the survivors,” she criticised.

In February, priests and deacons wrote to the papal nuncio to Chile stating that they were “troubled” by the nomination of Barros. Yet the Vatican still went ahead with the appointment.

Mrs Collins also highlighted that the Fr Karadima’s victims have been consistent in their allegations about Bishop Barros and that these allegations were made known in a canon law trial of Fr Karadima in 2011.

The church trial found the priest guilty of sexually abusing minors and ordered him to retire to “a life of prayer and penitence” in Santiago.

Marie Collins told CatholicIreland.net on Monday, “The meeting with Cardinal O’Malley went well we were very happy with his response.”

“He listened carefully to all our concerns and will be bringing them to the Holy Father in the next week,” she said.