Home > Featured > Pope tells the city and the world: Be not afraid amid the storm of COVID pandemic

Pope tells the city and the world: Be not afraid amid the storm of COVID pandemic 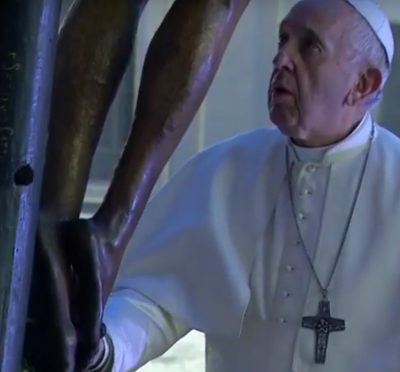 killed more than 26,000 people worldwide, Pope Francis quoted Mark’s Gospel and urged the faithful to “be not afraid”.

The setting for the address was almost as extraordinary as its circumstances. Pope Francis addressed a deserted St Peter’s Square made gloomy by the approaching dusk and the heavy rain that fell down upon the Eternal City as he began to speak.

Referring to Mark’s telling of how Jesus calmed a storm on the Sea of Galilee (Mk 4:35), Pope Francis said: “For weeks now it has been evening. Thick darkness has gathered over our squares, our streets, and our cities; it has taken over our lives, filling everything with a deafening silence and a distressing void, that stops everything as it passes by; we feel it in the air, we notice in people’s gestures, their glances give them away. We find ourselves afraid and lost. Like the disciples in the Gospel, we were caught off guard by an unexpected, turbulent storm. We have realized that we are on the same boat, all of us fragile and disoriented, but at the same time important and needed, all of us called to row together, each of us in need of comforting the other. On this boat are all of us. Just like those disciples, we too have realised that we cannot go on thinking of ourselves, but only together can we do this.”

Reminding the faithful that Our Lord asked the disciples during the storm, “Why are you afraid? Have you no faith?”, the Pope said: “The storm exposes our vulnerability and uncovers those false and superfluous certainties around which we have constructed our daily schedules, our projects, our habits, and priorities. It shows us how we have allowed to become dull and feeble the very things that nourish, sustain and strengthen our lives and our communities. The tempest lays bare all our prepackaged ideas and forgetfulness of what nourishes our people’s souls; all those attempts that anesthetize us with ways of thinking and acting that supposedly ‘save’ us, but instead prove incapable of putting us in touch with our roots and keeping alive the memory of those who have gone before us. We deprive ourselves of the antibodies we need to confront adversity.”

Behind the Pope were two remarkable objects of religious devotion: the Salus Populi Romani icon and the Miraculous Crucifix of St Marcellus.

The icon, which is usually kept in the Basilica of St Mary Major, is the most venerated image in Rome, and it is customary for the Holy Father to pray before it before and after any of his apostolic trips around the world.

The crucifix is considered to be twice miraculous: it was the sole object to survive a fire that devastated the Church of St Marcellus in 1519 and a procession of the crucifix is credited with bringing an end to an outbreak of the plague in 1522.

Before turning to pray before the Miraculous Cross of St Marcellus, the Pope said: “Embracing his cross means finding the courage to embrace all the hardships of the present time, abandoning for a moment our eagerness for power and possessions in order to make room for the creativity that only the Spirit is capable of inspiring. It means finding the courage to create spaces where everyone can recognize that they are called, and to allow new forms of hospitality, fraternity, and solidarity. By his cross, we have been saved in order to embrace hope and let it strengthen and sustain all measures and all possible avenues for helping us protect ourselves and others. Embracing the Lord in order to embrace hope: that is the strength of faith, which frees us from fear and gives us hope.”

Meanwhile, the Salesian News Agency has reported the death of Bishop Angelo Moreschi on Wednesday as a result of complications arising from a coronavirus infection. He is believed to be the first member of the hierarchy to succumb to COVID-19. The 67-year-old Italian had served as a missionary in Ethiopia during his entire priesthood, which began with his ordination in 1982.