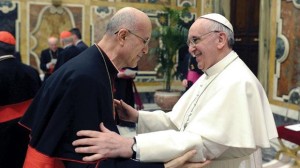 In a bold move, Pope Francis has stood down four of the five cardinals responsible for supervising the overhaul of the Vatican Bank.

On Wednesday, the Pontiff announced that four of the five commissioners, who were just eleven months into their five-year term, would be replaced.

The five were appointed by Pope Emeritus Benedict XVI prior to his resignation last February.

Only Cardinal Jean-Louis Tauran, the president of the Pontifical Council for Inter-Religious Dialogue, has retained his role under Pope Francis’ shakeup.

The other members of the Institute for Religious Works or IOR commission whose terms have now ended are Cardinal Tarcisio Bertone, the former Vatican Secretary of State; Cardinal Domenico Calcagno, the president of the Administration of the Patrimony of the Apostolic See; Cardinal Pedro Scherer of Sao Paolo; and Cardinal Telesphore Toppo of Ranchi, India.

The former secretary of state, Cardinal Tarcisio Bertone, was roundly criticised by many Vatican watchers for his incompetence in allowing a scandal like Vatileaks to occur and involve Benedict XVI.

Some commentators have highlighted that both prelates come from dioceses which would have large-scale dealings with financial affairs.

The other two new members of the Commission are Archbishop Pietro Parolin, the Vatican’s new secretary of state, who will be elevated to the cardinalate on 22 February and Cardinal Santos Abril y Castillo, a diplomat from Spain who is based in Rome and is a close friend of the Pope’s.

The fact that the Pope opted to remove the four commissioners less than a year into their term is an indication of the seriousness of the situation with the Vatican Bank, which has been mired in corruption and financial scandals.

Officially the bank, which is known as the Institute for Religious Works, is meant to assist the Church in funding its projects and outreach globally.

However, concerns over money laundering and corruption have brought it to the point where the Pope must either oversee root and branch reform or shut it down.

Last July, Vatican accountant, Fr Nunzio Scarano, was arrested and accused of smuggling millions of euro into Italy from Switzerland.

In 2012, the bank’s president, Ettore Gotti Tedeschi, was ousted after being accused of incompetence.

Meanwhile, in a separate development, the Pope has called for a “spending review” which would set a cap on canonisation costs for would-be saints.

Critics of the process have highlighted that those backed by well-financed organisations or supporters usually become saints far more quickly than those whose coffers are not as well lined.