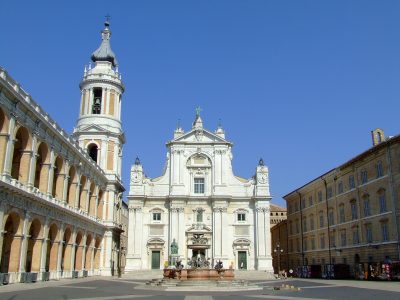 Pope Francis signed the post synodal Apostolic Exhortation to young people on Monday during his visit to the shrine of Our Lady of Loreto where he celebrated Mass inside the Holy House.

According to L’Osservatore Romano, a number of popes have made pilgrimages to the Holy House of Loreto, but Pope Francis is the first to celebrate Mass there since Blessed Pius IX.

Pope St John XXIII went to the shrine in 1962 to entrust the Second Vatican Council to Mary.

Pope Francis’ visit to the Sanctuary of Loreto coincided with the Feast of the Annunciation.

On Monday, he entrusted to Our Lady the fruits of the 2018 Synod of Bishops on Young People, the Faith and Vocational Discernment.

When Mass was over, the Pontiff signed the synod document on the altar under the image of Mary seeking her protection for a fruitful pastoral outcome.

The Pope also placed a golden stem of roses in a small silver urn on the altar as a gift.

During his visit to Loreto, Pope Francis spoke about the Exhortation and explained that there are three sections to the document, which mirror three phases of the Synod process.

Explaining its structure, he used the story of the Annunciation as his theme.

“In the event of the Annunciation the dynamic of the vocation appears, expressed in the three moments that marked the Synod: 1) listening to the Word-project of God; 2) discernment; 3) decision,” he said.

Following Mass, the Pope addressed a crowd of up to 10,000 people gathered in the square in front of the Basilica.

Pope Francis said the Sanctuary in Loreto was “a privileged place to contemplate the mystery of the Incarnation of the Son of God,” since it is “the house of Mary.”

Many pilgrims, he said, come from around the world to the “oasis of silence and piety” to draw strength and hope. He referred to the Holy House of Loreto as a home for the young, families, and the sick.

Pope Francis said it is a home for young people because the Virgin Mary “continues to speak to new generations, accompanying each one in the search for his or her vocation.”

It was for that reason, the Pope said, that he had chosen to sign his post-Synodal Apostolic Exhortation on young people in Loreto.

He highlighted the Virgin Mary as the model Christian disciple and suggested that today’s young people try to imitate her example as they search for God’s plan for their lives.

Pope Francis said the House of Mary in Loreto is also a home for the family.

“In the delicate situation of today’s world,” he said, “the family founded on marriage between a man and a woman assumes an essential importance and mission.”

He invited Catholics to rediscover God’s plan for the family and to reaffirm its central role in society.

The Pope also pointed out that Mary had lived a multitude of family relationships.

Within those walls, the Pope said, Mary lived out the many facets that characterise family relationships, “as a daughter, fiancée, and mother.” He added that the Church must care for families and young people in tandem and not separately.

According to tradition, the tiny stone house in Loreto is considered to be the home where the Virgin Mary was born and raised and also the house in which the Holy Family was thought to live when Jesus was a boy. It is also held to be the place where Mary received the angel’s annunciation.