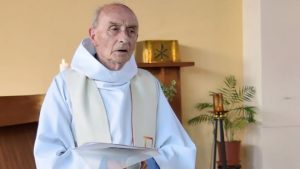 Pope Francis on Tuesday expressed his horror and shock over the killing of Fr Jacques Hamel and the wounding of another during Mass in the church of Saint Etienne du Rouvray in Normandy.

Two men entered the church as the 84 year old French priest was celebrating Mass and killed him by cutting his throat in front of members of the faithful.

Two nuns were among the hostages held at the church by the Islamic State extremists while a third nun managed to escape and call the police. The killers were later shot dead by the police.

From Krakow where he was due to take part in the 31st World Youth Day, Archbishop Dominique Lebrun of Rouen, said in a statement, “The Catholic Church has no other weapons but prayer and brotherhood among all peoples.”

As he prepared to rush back to his city, he added, “I leave here hundreds of young people who are the future of humanity. I beg them not to give up in the face of violence but to be apostles of the civilisation of love.”

Meanwhile, a statement released by Fr Federico Lombardi, Director of the Vatican’s Press Office said the Pope was “particularly shocked because this horrible violence took place in a church, in which God’s love is announced, with the barbarous killing of a priest and the involvement of the faithful”.

Fr Lombardi said the Pope shared the pain and the horror caused by this absurd violence and expressed his firm condemnation of every form of hatred and prays for the victims.

In his statement Fr Lombardi commented on the fact that the atrocity was the latest in a series of violent attacks in recent days which have created immense pain and preoccupation.

He added that the Pope was close to the Church in France, to the Archdiocese of Rouen, to the local community and to the French people.

Closer to home, Archbishop Eamon Martin wrote to Archbishop Dominique Lebrun of Rouen to express his shock, to offer condolences and to express the prayerful solidarity of the Church in Ireland following the horrific incident in the church of Saint-Etienne-du-Rouvray and the violent death of Fr Jacques Hamel.

Expressing his closeness in prayer to all those affected by today’s incident, the Archbishop added that it was “profoundly disturbing that people gathered in a church for worship and prayer should be targeted in this way”.

The Primate of All Ireland said he was “deeply moved” by Archbishop Lebrun’s own words when he said that the “only weapons that we can take up” as Catholics “are prayer and fraternity among peoples” and his call for people “not to give up in the face of violence but to become apostles of the civilisation of love”.

And he has assured Archbishop Lebrun of his prayers for the repose of the soul of Father Jacques, for those injured in the attack, and for the community of Saint-Etienne-du-Rouvray.

Meanwhile, the Church of Ireland Archbishop of Dublin, Dr Michael Jackson, offered his thoughts and prayers following the attack on the French church.

In a statement, Archbishop Jackson said, “Once again today our thoughts and our prayers turn to France where another act of terror has shaken the nation and the world beyond.”

“An atrocity which has seen a priest murdered while saying Mass and hostages taken in the church in the small town of Saint-Étienne du Rouvray in the suburbs of Rouen in Normandy has brought the violence and hatred to a place of worship, to a Christian church.”

“Our prayers again are for the President and people of France and those affected by this latest attack as they seek a way forward which respects the ideals of French society along with freedom for all to worship in safety.”

“We also pray for all those in authority who seek to find a way to stem the terror and for those, at every level, who deal with the human sadness and the societal aftermath of these attacks.”

“We pray at this time for an end to all violence but also for the nurturing of the seeds of love among all of God’s people, no matter what their faith and beliefs. We must continue to reach out to our brothers and sisters of all World Faiths to work in solidarity against the spread of fear and terror. Inter faith understanding and respect are now as urgent as ever they were, and in fact increasingly more urgent.”

The Minister for Foreign Affairs, Charlie Flanagan, said he was “appalled” by the murder of the elderly priest and he condemned it in the strongest possible terms.

“I want to convey our condolences to the French Government and the people of France, who have yet again been targeted by those who have no regard for human life and no respect for the freedoms we all hold so dear.”

“Our thoughts are with the family and loved ones of the murder victim and with all of those affected by this horrific incident.”