Three Irish contributors are included in a book of experiences of the elderly commissioned by Pope Francis and launched by Archbishop Jude Thaddeus Okolo, Papal Nuncio to Ireland, earlier this month.

The book includes a contribution from acclaimed filmmaker in Hollywood Martin Scorsese, who was present at the Vatican launch.

Sharing the Wisdom of Time came from the conviction that in order to “walk toward the future, the past is needed”. It includes stories from all around the world on experiences of love, loss, hope, peace and faith.

Irish contributors to the book include Des O’Grady SJ, Dublin, who sees some light in the darkness of living with Alzheimer’s Disease. Margaret Irwin West, Connemara, an artist in her 90s who is still working and exhibiting, speaks about the importance of light and hope, and former nurse and granny, Margaret O’Reilly from Derry, tells of a valuable lesson she learned as a child after telling her first lie.

“In a world where, in a true sense, ‘there is nothing new under the sun’, we can learn so much from those who have lived life before us and distilled the tranquil wisdom that only comes with years,” stated Archbishop Okolo at the launch of the book.

He explained that Pope Francis wants people to see the elderly “not as useless beings, only fit for the grave”. Instead the Pope asks young and old to join forces for the betterment of the world.

“He invites the young to listen to, and bond with, their elders in an effort to counter a culture of waste, a growing indifference to the plight of migrants and refugees, and a dangerous resurgence of populism; he urges them to adopt a positive attitude which spurns hatred and intolerance,” said Archbishop Okolo.

The Archbishop said that it is Pope Francis’s hope that the book and a previous one, addressed to children, will create inter-generational dialogue. 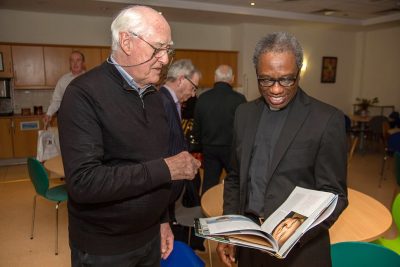 Guest with Archbishop Okolo, Papal Nuncio, at the launch

The book contains Pope Francis’s interactions with elder people from every corner of the globe – Latin America, the Far East, the USA, Africa, Europe, Ireland and the UK. It is illustrated with photographic portraits taken by National Geographic photographer Paul Audia.

Commenting on the book, Archbishop Okolo said: “Every story or expression has its own charm, its validity, its authenticity, its impact; every story is a life, is a testimony to the power of faith and the capacity of human resilience, and love.”

He explained that the 175-page book was the fruit of collaboration of two associations – the Jesuit Refugee Service and Unbound, which takes care of more than 300,000 people in 18 countries.

Thanks to Unbound, more than 250 people’s stories were collected and Jesuit Fr Spadaro presented these to Pope Francis, who then made his own contribution. Pope Francis read each story and prayed over it before putting his own pen to paper. He wrote the preface to the book and wrote as an older person.

The stories are varied and include those of a nun in a monastery, a candy seller in Colombia, a blind basket weaver in Kenya and a survivor of Auschwitz.

Sharing the Wisdom of Time by Pope Francis and friends is published in Ireland and the UK by Messenger Publications.