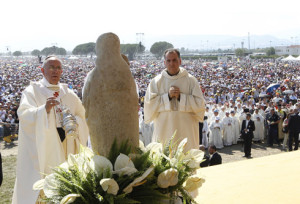 Pope Francis uses incense as he celebrates Mass in the Italian town of Sibari, Calabria. Pic courtesy: The Tablet

Those involved in organised crime or who deliberately carry out acts of violence against others or against the environment cannot consider themselves Christians Pope Francis warned at an audience in the Vatican on Saturday.

The Pontiff made his comments in his address to pilgrims from the Diocese of Cassano all’Jonio, a diocese in the southern Italian region of Calabria which has been deeply scarred by the local ‘Ndrangheta mafia.

He told the group of pilgrims from the Calabrian diocese that external forms of piety without “a real conversion are not enough to be considered in communion with Christ and his Church”.

He appealed to those who with the malice and arrogance typical of criminals, make lawlessness their lifestyle and to those who have chosen the path of evil and are affiliated to criminal organisations to accept the invitation to conversion. “Open your heart to the Lord!” he exhorted.

“The Lord is waiting for you and the Church welcomes you” he said “if your willingness to serve good is as clear and public as was your choice to serve evil”.

In June last year, Pope Francis made a one-day visit to the Diocese of Cassano all’Jonio.

He told the pilgrims who visited him on Saturday that the memory of his visit to their community was “still alive in my heart: the meetings with the prisoners, the sick, with priests, religious, seminarians”.

Asking how many seminarians are there now, he said eight was “not good enough”.

“We must pray, pray for more vocations….Ok? The Lord told us to pray so he will send priests.”

He also recalled his meeting with the elderly; his visit to the diocesan cathedral and “the extraordinary presence of people in the plain of Sibari, but all of Calabria was there!”

The Pope paid tribute to the work and ministry of the Emmanuel Community which he described as among the “beauties” of Calabria.

“It is an example of acceptance and sharing with the weakest. Young people devastated by drugs have found in you and in your structures the ‘good Samaritan’ who knew how to bend over their wounds and was able to anoint them with the balm of closeness and affection.”

He added, “How many families have found in you the help they needed to restore hope for the fate of their children!”

“The Church is grateful to you for this service. By being present alongside young people and adults subjugated by dependencies, you have embraced the suffering Jesus and you sow hope.”