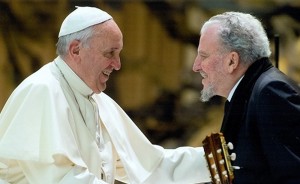 Yesterday Pope Francis sent 250 families from the Neocatechumenal Way on mission to evangelise the five continents.

Eight thousand people from the movement witnessed the event, including the couple leading the movement in Ireland, Claudio and Emmanuella Bandini.

The Missio ad Gentes involves groups of four to five families and their children, setting off with a priest, a seminarian and if possible a religious sister to live in an area.

Yesterday, Pope Francis sent out fifty of these groups.

The families who have volunteered to go on the ‘missio’ have their destinations decided by a kind of lotto, Emmanuella Bandini told CatholicIreland.net.

Usually a bishop, in agreement with a parish priest, invites the group to settle in a diocese.

Although the Neocatechumenal way has been present in Ireland for thirty-six years, this year for the first time a ‘missio’ will come to Ireland, to the diocese of Limerick.

Missios will also leave for Canada, the United States, Peru and Brazil and in Asia, for India and China.

The African ‘Missio ad Gentes’ are to Ethiopia, the Ivory Coast, South Africa, Equatorial Guinea and Nigeria, and groups will also go to Australia and Papua New Guinea.

“This form of evangelisation starts from the Body of Christ, the Christian community. Families, children, the priest and seminarian form a community and give a witness of faith to reach the people around them,” said Claudio Bandini.

Unlike in a regular parish, the catechesis does not start with the sacraments, but with the word of God.

“The word of God gives a meaning to a person’s sickness, maybe to problems he or she is having with a child,” Emmanuella Bandini explained. The sacraments come later.

For example the Neocatechumanal Way families celebrate ‘lauds’ in their homes – reading and singing psalms.

“We ask the children what are these words saying to you?  Often problems they are experiencing, for example at school, emerge – they talk about bullying, their frustrations and so on. It is extremely good for the family,” said Emmanuella Bandini.

Addressing the movement yesterday as he sent them out on mission, Pope Francis focused on three words: unity, glory, and world.

Unity: “You have received a great charism for the baptismal renewal of life,” the Holy Father told them.

“Every charism is a grace of God to intensify communion. But this charism can deteriorate if you close in or if you boast about it, when you want to distinguish yourselves from the others. So we have to safeguard it. How? Following the main path: of humble and obedient unity. If this is present, the Holy Spirit continues to work, just as He did in Mary, who was open, humble and obedient.”

Glory: “God’s glory is revealed on the cross: it is love shining there which spreads out. It is a paradoxical glory without clamour, without gain or applause. This is the only glory that makes the Gospel fruitful.”

World: “God is not attracted by worldliness, in fact, He detests it; but He loves the world he has created, and He loves His children in the world, just as they are, wherever they live, even if they are ‘far away’.”

“Show the children the tender gaze of the Father and consider  the realities you will encounter as a gift; become familiar with the cultures and the languages ​​and respect local customs, recognising the seeds of graces which the Spirit has already spread.”