Pope to receive WMOF2018 ‘Icon of the Holy Family’ today 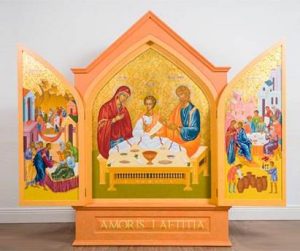 Hopes are mounting that the Vatican will confirm Pope Francis’ visit to Ireland later today when two Irish families present him the World Meeting of Families 2018 icon at his weekly general audience.

The Tobin family from Co Kildare and the Bushell Family who live in Rome will present the official ‘Icon of the Holy Family’ to the Pontiff this morning.

The two families are part of a delegation led by Archbishop Diarmuid Martin, President of WMOF2018, who is accompanied by Fr Timothy Bartlett, Secretary General of WMOF2018 and the iconographer Mihai Cucu.

This official icon for the World Meeting of Families was anointed by Archbishop Martin at a Mass to mark the one year countdown to WMOF2018 in Knock last August.

Since then the icon has been brought from parish to parish across Ireland as part of a pilgrimage to help parishes prepare for WMOF2018.

The Tobin family of Brenda and Bryan and their two children Emma (20) and Cathal (13) are also accompanied by grandmother Maureen Tobin from Cobh, Co Cork.

The Bushell family comprises Mary and Michael and their two children Olivia (7) and Molly (5). The family moved to Rome in 2016.

This universal Church celebration of families and faith will take place from 21 – 26 August with the theme, ‘The Gospel of the Family: Joy for the World’.

With six months to go until the 9th World Meeting of Families opens in Dublin, the WMOF2018 office has released its three-day preliminary programme for the Pastoral Congress. This will take place in the RDS from 22-24 August.

The panel discussions at the Congress will include parents, priests and religious, and various specialist speakers and they will cover themes such as the effect of technology on family life, the witness of women in leadership, Pope Francis on the vocation of fatherhood; the joys and challenges of parenting, supporting newly married couples in the parish, families and parish supporting families with special needs; and, dignity and safety in the digital age.

All of the themes chosen for workshops and panel sessions relate to topics discussed by Pope Francis in his Apostolic Exhortation of 2016, ‘Amoris Laetitia’ (The Joy of Love).

Recently, the bishops were told by Fr Timothy Bartlett that there was a need for more volunteers, and that so far 5,500 pilgrims have registered from 64 countries.

The World Meeting of Families is held every three years. This major international event brings together families from across the world to celebrate, pray and reflect upon the central importance of marriage and the family as the cornerstone of Catholic lives, of society and of the Church.

Organisers have identified the following key moments in the gathering, which will see thousands of families from around the world gather in Dublin:

1. A National Opening of World Meeting of Families will take place simultaneously in the twenty-six dioceses on the island of Ireland on 21 August.

2. From 22 – 24 August, a three-day Pastoral Congress will take place in the RDS, Dublin and will include entail a joyful and reflective programme of workshops, talks and discussions centred on the theme: “The Gospel of the Family: Joy for the World”. The Congress will also offer an engaging programme for young people to include faith and fun activities for children.

3. A Festival of Families will be held on Saturday 25 August 2018. This will involve a cultural concert within a prayerful and joyful atmosphere, during which personal stories of faith will be shared by families, each representing the five continents.

4. Holy Mass for WMOF2018. A solemn Eucharistic Celebration on Sunday 26 August will involve thousands of pilgrims from Ireland and around the world.

Click here for more detailed information on the Icon as well as a selection of images https://www.worldmeeting2018.ie/WMOF/media/downloads/WMOF2018-Icon-of-the-Holy-Family.pdf

To book tickets to attend the Pastoral Congress in the RDS, the Festival of Families, and for the closing Mass of WMOF, please register on www.worldmeeting2018.ie