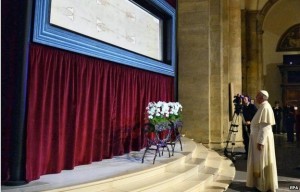 At the beginning of his two-day apostolic visit to the Italian city of Turin, Pope Francis appealed to workers, farmers and entrepreneurs not to lash out at immigrants who are also victims of inequality in the ‘throw-away economy’.

In his address on Sunday morning in Piazza Rebaudengo, the Pope acknowledged that the economic crisis has left many Italians unemployed.

He urged all to say ‘No’ to an economy of waste which excludes persons who do not produce, ‘No’ to corruption and the idolatry of money, and ‘No’ to inequality which generates violence.

Referring to their saintly compatriot, Don Bosco, the Pontiff told the people of Turin that the Saint “teaches us that the best method is prevention: even social conflict must be prevented, and this is done with justice”.

He also emphasised the need for an economic model which works for the common good.

The challenge of the future must be “faced with solidarity and broad vision”, and with a “social and generational pact”, which pools resources for the common effort.

During his Sunday Angelus in Turin, the Pope from Buenos Aires recalled that his own grandparents were immigrants to Argentina from the Piemontese region of Italy, which he termed “this blessed land of which I am a grandson”.

His Angelus address centred on the Shroud of Turin as an icon of Jesus’ salvific, self-sacrificing love, which “attracts us to the face and martyred body of Jesus and, at the same time, pushes us toward the face of every person who suffers and is unjustly persecuted. It pushes us in the same direction of the gift of love of Jesus”.

Later on Sunday, the Pope set aside his prepared text in an address to male and female religious of the Salesian Family who this year are celebrating the bicentenary of Don Bosco’s birth in August 1815.

The Salesians, with their sister order the Daughters of Mary Help of Christians, were founded by St John Bosco – known as Don Bosco – Turin’s most famous and well-known saint.

Pope Francis spoke about three specific aspects of the charism of Don Bosco: his trust in divine Providence; his vocation to be a priest of the young, especially the poorest among them; his loyal and active service to the Church, particularly to the Pope.

He said Don Bosco’s unwavering confidence in God is the essence of consecrated life.

The founder of the Salesian Family, he said, lived out to the end his priestly mission “sustained by an unwavering confidence in God.”

This confidence, the Pope said, is also “the essence of the consecrated life, so that the service of the Gospel and of our brothers should not remain a prisoner of our views, of the realities of this passing world, but might continue to rise above ourselves.”

Another important aspect of the life of Don Bosco, Pope Francis continued, is “the service to the young, beginning with the most vulnerable and abandoned: this concerns the “pedagogy of the faith” which is taken up in the Salesian formula “educating to evangelise, and evangelising to educate.”

The Holy Father encouraged the Salesian religious to carry on “with generosity and confidence the multiple activities in favour of the new generations: oratories, youth centres, professional institutes, schools, and colleges. But without forgetting those whom Don Bosco called ‘the young people of the streets’.”

These young people, he said, “have great need of hope, of being formed in the joy of the Christian life.”

Finally, the Pope recalled that Don Bosco invites his spiritual sons and daughters “to always go forward anew to find the children and young people where they live: in the peripheries of the great cities, in areas of physical and moral danger, in social contexts where they lack so many material things, but above all lack love, understanding, tenderness, hope.”

At the end of the first day of his two-day trip to Turin, Pope Francis met tens of thousands of young people in the city’s central square, Piazza Vittorio.

He spoke to the young people “from the heart” for more than half an hour, laying aside his prepared remarks.

The Pope responded to questions from three young people on the topics of love, life and friendship.

Love, the Pope said, is concrete, and is seen more in actions than in words. Love always communicates itself. Love, he continued, is very respectful of persons, it does not use people, and so it is chaste.

The Holy Father also responded to a question about disappointments in life.

Pope Francis referred to ongoing wars in Europe, in Africa, and in the Middle East; and to historical violence such as the great tragedy in Armenia at the beginning of the century, to the Shoah, and to the gulags in Soviet Russia.

It is easy to grow disillusioned with life, he said, when even today we live in a “culture of waste”.

In the face of such evils, the Pope asked, ‘how can we live a life that does not disappoint?’

“We must go forward with our projects of construction, and this life does not disappoint,” he said. We must help one another.

And to do this, Pope Francis told the young people, they must go against the current, they must be courageous and creative.