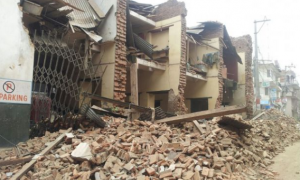 Pope Francis has said he is praying for the victims of the massive earthquake in Nepal which has left at least 1,300 people dead.

The quake, which measured 7.9 on the Richter Scale, shook Nepal just before noon on Saturday, causing major damage to the densely-populated Kathmandu Valley.

It is reported to have caused avalanches in the Mount Everest region of the Himalayas and tremors were felt as far away in New Delhi in India.

Fr Pius Perumana, an aid worker from Caritas Nepal in Kathmandu, spoke to Vatican Radio in the aftermath of the disaster.

He said many of the houses in the tightly packed city have collapsed and survivors need emergency medical care and shelter.

“I managed to reach Kathmandu, though the roads were blocked…they are still searching for survivors. The reports are still coming in…The picture is not very clear,” he said.

This is Nepal’s second-worst earthquake since 1934, when an 8.0 magnitude quake destroyed three cities: Kathmandu, Bhaktapur and Patan.

GOAL CEO, Barry Andrews, told Independent.ie, “We have spoken with local agencies on the ground who have confirmed that hospitals are overrun and that huge numbers of people have been left homeless and are sleeping rough.”

He added that, “Recovery teams are continuing to search desperately for survivors trapped in the rubble, a task that has been compounded by the fact that the entire city is without electricity.”

“We have also received reports that a large number of villages on the outskirts of the capital have been completely flattened. Unfortunately, we are expecting the numbers of dead and injured to rise significantly in the coming hours.”

Meanwhile, a group of nine Irish hillwalkers who were in Nepal when the quake struck are all reported safe.

Among the group was Co Wexford parish priest Fr Tom Dalton who contacted his family and Fr Jim Butler, who is carrying out his duties in Riverchapel parish for the priest.

“All is well,” the 45-year-old parish priest reported of the group but he said they had witnessed serious damage in the area.