Home > News > Pope prays for flood victims around the world

Pope prays for flood victims around the world 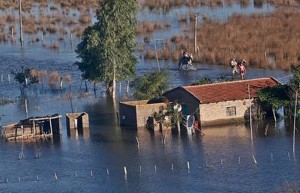 At his final Wednesday audience yesterday, Pope Francis called for solidarity and prayers for victims of natural disasters that recently have struck parts of the United States, Great Britain and South America.

Flooding has spread across Argentina, Brazil and Uruguay but Paraguay is the country hardest hit.

An estimated 150,000 people in Paraguay, Argentina, Uruguay and Brazil have been forced to flee their homes as the region’s worst flooding in 50 years showed no signs of lessening.

Believed to be exacerbated by the El Niño weather phenomenon, the BBC has reported that at least six people have been killed in the floods.

In the United States, severe weather has included heavy rain causing flooding from Missouri to Alabama, to a series of devastating tornadoes in northern Texas.

Meanwhile, Ireland and the UK have been buffeted by another major north Atlantic storm, Storm Frank, which has caused further flooding and produced wind gusts in excess of 80km/h.

“I invite prayers for the victims of the natural disasters that have recently struck the United States, Great Britain and South America, particularly Paraguay, sadly claiming lives, displacing many people and causing extensive damage. May the Lord give comfort to those peoples, and may fraternal solidarity support them in their needs,” he said.

There was a time in which, in the divine-human Person of Christ, God was a child, and this must hold a particular significance for our faith, he said.

In the Christmas season we remember his childhood but of course we know little of it, except that he was given his name eight days after his birth and his presentation at the Temple (cf. Lk 2:21-28).

“In addition to this, to the visit of the Magi and the ensuing escape to Egypt (cf. Mt 2:1-23). Then, there is a great leap to 12 years of age, when with Mary and Joseph he goes in pilgrimage to Jerusalem for Passover, and instead of returning with his parents, he remains in the Temple to speak with the doctors of the law.”

So to learn about the child Jesus, we must look at the “lives of children”.

“It is a beautiful habit that parents and grandparents have, that of watching what the children do,” he continued.

“We discover, first of all, that children want our attention. They have to be at the centre — why? Because they are proud? No! Because they need to feel protected. It is important that we too place Jesus at the centre of our life and to know, even if it may seem paradoxical, that it is our responsibility to protect him. He wants to be in our embrace, he wants to be tended to and to be able to fix his gaze on ours.”

The final characteristic of children is that they like to play but this means “abandoning our logic in order to enter theirs”.

Before Jesus we are called to abandon our pretence of autonomy — in order to instead accept the true form of liberty, which consists in knowing and serving whom we have before us, he said.

He concluded by saying, “Let us hold the Child Jesus tightly in our arms; let us place ourselves at his service. He is the font of love and serenity. It will be beautiful today, when we get home, to go to the nativity scene and kiss the Baby Jesus and say: ‘Jesus, I want to be humble like you, humble like God’, and to ask him for this grace.”