Pope pleas for peace in Gaza, Iraq and Ukraine 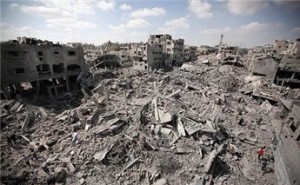 Pope Francis made another urgent appeal for an end to the conflicts in the Middle East, in Iraq and in Ukraine on Sunday.

Speaking after his regular Angleus address to thousands of people gathered in St Peter’s Square, the Pope spoke of the victims of war, in particular the children who die or are injured and orphaned by the violence.

“I think especially of the children whose hopes for a dignified future are taken from them, dead children, injured and mutilated children, orphans and children who have bits of weapons as toys, children who don’t know how to smile,” the Pontiff said.

He then exhorted, “Please stop, I ask you with all my heart.”

The Pope urged all those listening to his words to continue joining him in prayer that God might grant to the peoples and leaders in the Middle East, in Iraq and in Ukraine the wisdom and strength to pursue the path of peace with determination and to face each dispute with the force of dialogue and reconciliation.

Every decision, he said, must not be based on particular interests but on the common good and on respect for each person.

Noting that Monday marks the 100th anniversary of the outbreak of the First World War which caused millions of victims and vast destruction, the Pope said this conflict, which the Pope of the time, Benedict XV, called a “senseless slaughter”, resulted, after four long years, in a very fragile peace.

Tomorrow, the Pope said, as we remember this tragic event, “I hope that the mistakes of the past won’t be repeated, but that the lessons of history will be taken into account, so that peace always prevails through patient and courageous dialogue.”

Before reciting the Angelus prayer, Pope Francis reflected on the day’s Gospel reading from St Matthew which tells the parables of the Kingdom of Heaven as a mustard seed, a hidden treasure or a pearl of great price.

Those who come to know Jesus, by reading the Bible, he said, understand that the Kingdom of Heaven is indeed the greatest treasure which changes lives and gives meaning to everything we do.

Urging his listeners to always keep a portable copy of the Gospels with them and read from it each day, the Pope said the joy of a Christian who has discovered this treasure is evident as each word and each gesture will show forth the love that God has given us through his son, Jesus Christ.