Home > News > Pope Paul VI to be beatified on Sunday

Pope Paul VI to be beatified on Sunday 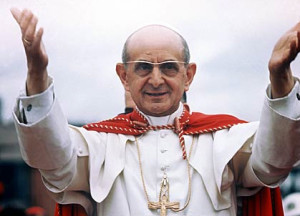 The Vatican has confirmed that Pope Emeritus Benedict XVI will be among those attending the beatification of Paul VI on Sunday, thirty-six years after the Italian pontiff’s death.

Speaking on Friday, retired Cardinal Giovanni Battista Re, who comes from the same diocese as Pope Paul VI and worked for him in the Vatican Secretariat of State, told reporters that Paul VI was a pope of ‘firsts’.

He said Paul VI has gone down in history as the pope who steered and implemented the Second Vatican Council, the first pilgrim pope, the pope who gave away the triple crown symbol of temporal power.

According to the Italian prelate, Paul VI was a man who was very much misunderstood during his lifetime.

He said the world Paul VI lived in was a changing one both at an ideological and political level, and the decisions he made were often met with psychological resistance from those around him for moving with the times.

Cardinal Re described the Italian pontiff as highly cultured and acute, spiritually rich, humble and respectful of others whoever they might be, open to dialogue, who loved and served the Church and humanity.

According to the vice postulator for the Cause of the beatification of Paul VI, Redemptorist Fr Antonio Marrazzo, everything is in place for the beatification, including the miracle and relics.

However, the now 13-year-old boy involved in the miracle accepted for the beatification will not attend the Mass, nor will his parents, as they have asked that their identities not be revealed.

The miracle attributed to Paul VI goes back to the 1990s and relates to an unborn child from California whose mother’s life was at risk along with the life of her baby.

Advised by doctors to terminate the pregnancy, she instead sought prayers from an Italian nun who was a family friend.

The nun placed a holy card with Pope Paul’s photograph and a piece of his vestment on the woman’s stomach. The baby was born healthy and continues to be “completely healthy,” Fr Marrazzo said.

The relics are two blood stained vests worn by Paul VI during the attempt on his life in the capital of the Philippines, Manila in 1970.

The one habitually kept in his hometown will be brought to Rome in a reliquary for the beatification. A hymn has also been composed for the occasion.

After St John XXIII died in 1963, Pope Paul reconvened the Second Vatican Council, presided over the final three of its four sessions and oversaw the promulgation of all of the council’s documents. He also led the process of implementing the council’s reforms.

Pope Emeritus Benedict XVI was made a cardinal in 1977 by Pope Paul.

Born Giovanni Battista Montini in 1897 in the northern Italian province of Brescia, he was ordained to the priesthood in 1920 and was named archbishop of Milan in 1954.