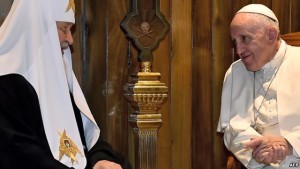 In an historic first meeting since the Great Schism of 1054, the head of the Roman Catholic Church and the largest Church in Eastern Orthodoxy met in Cuba on Friday and issued an urgent plea on behalf of the world’s persecuted Christians.

Russian Orthodox Patriarch Kirill and Pope Francis issued a joint declaration in which they warned that whole families, villages and cities of Christians in many countries of the Middle East and North Africa are being completely exterminated.

In Syria and Iraq, Christians are seeing their churches being “barbarously ravaged and looted, their sacred objects profaned, their monuments destroyed”.

They called upon world leaders “to act urgently in order to prevent the further expulsion of Christians from the Middle East.”

“It is with pain that we call to mind the situation in Syria, Iraq and other countries of the Middle East, and the massive exodus of Christians from the land in which our faith was first disseminated and in which they have lived since the time of the Apostles, together with other religious communities.”

They said that in raising their voices in defence of persecuted Christians, they wished to also express their compassion for the suffering experienced by the faithful of other religious traditions who have also become victims of civil war, chaos and terrorist violence.

“Thousands of victims have already been claimed in the violence in Syria and Iraq, which has left many other millions without a home or means of sustenance. We urge the international community to seek an end to the violence and terrorism and, at the same time, to contribute through dialogue to a swift return to civil peace.”

They emphasised that large scale humanitarian aid must be assured to the afflicted populations and to the many refugees seeking safety in neighbouring lands.

The appealed to “all those whose influence can be brought to bear upon the destiny of those kidnapped, including the Metropolitans of Aleppo, Paul and John Ibrahim, who were taken in April 2013, to make every effort to ensure their prompt liberation”.

The joint declaration signalled a thaw in relations between the two wings of Christianity reflected in their statement, “We are not competitors but brothers”.

The Pope and the Patriarch also strongly defended traditional marriage and the family, describing the family as the natural centre of human life and society.

“We are concerned about the crisis in the family in many countries. Orthodox and Catholics share the same conception of the family, and are called to witness that it is a path of holiness, testifying to the faithfulness of the spouses in their mutual interaction, to their openness to the procreation and rearing of their children, to solidarity between the generations and to respect for the weakest.”

“The family is based on marriage, an act of freely given and faithful love between a man and a woman. It is love that seals their union and teaches them to accept one another as a gift. Marriage is a school of love and faithfulness.”

“We regret that other forms of cohabitation have been placed on the same level as this union, while the concept, consecrated in the biblical tradition, of paternity and maternity as the distinct vocation of man and woman in marriage is being banished from the public conscience.”

They also called for respect for the inalienable right to life.

“Millions are denied the very right to be born into the world. The blood of the unborn cries out to God (cf. Gen 4:10)” and they highlighted that the emergence of so-called euthanasia “leads elderly people and the disabled begin to feel that they are a burden on their families and on society in general”.

Expressing concern about the development of biomedical reproduction technology, they warned that the manipulation of human life represents an attack on the foundations of human existence, created in the image of God.

“We believe that it is our duty to recall the immutability of Christian moral principles, based on respect for the dignity of the individual called into being according to the Creator’s plan.”

The Patriarch arrived in Cuba on Thursday at the start of a three-nation tour of Orthodox communities in Latin America, while Pope Francis was on his way to Mexico City, where arrived later on Friday evening.