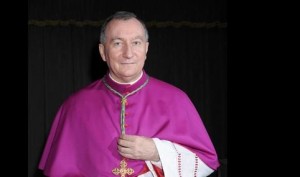 Pope Francis has appointed Archbishop Pietro Parolin, who is currently papal nuncio to Venezuela, as the Vatican’s new secretary of state.

He replaces 78-year-old Cardinal Tarcisio Bertone who was appointed in 2006 by Pope Benedict XVI.

This is the most significant appointment made by Pope Francis since he took office in March, as the secretary of state acts as the Pope’s chief aide.

Although the secretary of state has no authority on doctrinal issues, he stands in when the pope is ill. The role also involves guiding the curia, the Vatican’s finances and the appointment of bishops to the diplomatic corps.

The fifty-eight-year-old Italian is due to takeover from his Salesian predecessor on 15 October.

Archbishop Parolin is the youngest prelate to occupy this role since Eugenio Pacelli was appointed secretary of state in 1930 at the age of 53. He later became Pius XII.

Ordained in 1980, Archbishop Parolin’s first foreign posting for the Vatican was in Nigeria in 1986, and this was followed by Mexico in 1989 where he fought to gain legal recognition for the Catholic Church. He has worked on Vatican relations with Vietnam and China.

In 1992, he returned to Rome to work for the Secretariat of State and was appointed to a position equivalent to deputy foreign minister in 2002. In that role, he established contacts with diplomats, international leaders, NGOs, and journalists. He continued as the Vatican’s deputy foreign minister for seven years until 2009, when he was appointed papal nuncio to Caracas.

He is known to be a good administrator and linguist which Vatican watchers have contrasted with Cardinal Bertone, a canon lawyer, who lacked diplomatic experience and did not speak English.

Responding to the news, Archbishop Parolin said in a statement, “I feel the full weight of the responsibility placed upon me: this call entrusts to me a difficult and challenging mission, before which my powers are weak and my abilities poor.”

John Allen of the National Catholic Reporter has described Archbishop Parolin as “a consummate insider” who has been on “the front lines of shaping the Vatican’s response to virtually every geopolitical challenge of the past two decades.”

The Bertone era was beset by a series of gaffes and scandals, including Vatileaks, which involved the theft and leaking of papal documents to the media last year by Benedict XVI’s butler.

Critics had also accused Cardinal Bertone of favouritism and making poor choices in some important appointments, including Benedict’s naming in 2007 of a Polish archbishop who had collaborated with the Polish secret police during the Communist era. The appointment was rescinded almost immediately after it was announced.

In 2009, Pope Benedict lifted the excommunication of the Holocaust denier, Bishop Richard Williamson, who is a member of the ultra right wing SSPX group. The Vatican claimed that the Pontiff had no knowledge of Williamson’s views and Cardinal Bertone was blamed for the embarrassment it caused Benedict XVI and the Church.

The former president of the Vatican bank, Ettore Gotti Tedeschi, is known to have been close to Cardinal Bertone. He was pushed out by the IOR’s board last year, who accused him of being incompetent. He said he was ousted because he wanted the bank to be more transparent. This year, the bank’s director and deputy director – who were both considered close to Cardinal Bertone – were forced to stand down over a money laundering inquiry.

In addition to naming Archbishop Pietro Parolin as the new secretary of state, Pope Francis on Saturday also confirmed a number of other officials in their current roles including Archbishop Georg Gänswein, a key aide to Pope Benedict, who will remain as head of the papal household.