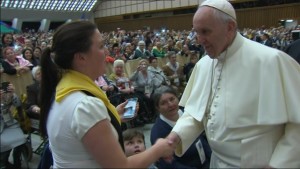 A nine year old relative of the ten people who died tragically in the fire in Carrickmines was among the 7,000 Roma and Travellers who met Pope Francis on Monday.

Bill Connors was with his mother Margaret O’Leary Connors and his seven year old cousin Dan, and his mother Biddie, in the front seats for the audience at the Paul VI Hall.

After the Pope’s address, Bill, who suffers from a lung disease, was blessed by the Pontiff as he greeted pilgrims and Margaret O’Leary Connors said her son was “delighted” and “chuffed”.

Ms O’Leary Connors works with the Southside Travellers Action Group and her mother is related to the Connors family who perished in the fire in the halting site in Glenamuck over two weeks ago.

Thomas and Sylvia Connors and their three children, Jim, Christy and baby Mary died in the blaze.

In his address on Monday, the Pope said, “We no longer want to attend family tragedies where children die of cold or in the flames, or become objects in the hands of depraved people, young people and women are involved in drug trafficking or human trafficking.”

The Pope also criticised the inability to accept different customs.

Ms O’Leary Connors said the experience had reignited her faith.

“It’s just so uplifting. The way we feel at home, the situation with the housing, to know that the Holy Father is with us even when the Government does not appear to be with us, that is why we are so religious, we can rely on our religion,” she said.

She added, “I think he is doing wonders for our religion, and especially for Ireland.”

Speaking to the audience of thousands of Roma and Travellers the Pope said, “The time has come to uproot secular prejudice, preconceived ideas and the reciprocal diffidence that are often at the base of discrimination, racism and xenophobia.”

But he also called on the Roma and Travellers to play their part in repairing their public image.

“You can do this if you are good Christians, avoiding all that is not worthy of this name: lies, frauds, swindles, altercations.”

He added that young Roma would have better prospects if they are educated, and underlined that parents should not prevent their children from attending public schools.

“Children are your most precious treasure” the Pope said as he pointed out that education is at the base of the healthy development of the person.

“Your children have the right to go to school, do not stop them from doing so!” he said.

Pope Francis also asked civil institutions to guarantee adequate formation courses for young Roma, giving those families most in need the possibility of being integrated in educational and labour programmes.