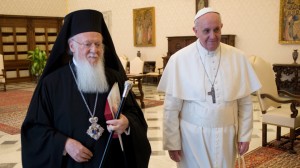 Pope Francis met with a delegation representing the Ecumenical Patriarch of Constantinople, Bartholomew I, on Saturday ahead of today’s Solemnity of the Apostles Peter and Paul.

Metropolitan Ioannis (Zizioulas) of Pergamo, co-president of the International Commission for Theological Dialogue between the Catholic and Orthodox Churches, headed the delegation and was accompanied by Archbishop Job de Telmissos and Patriarchal Archdeacon John Chryssavgis.

The delegation also met with members of the Pontifical Council for Promoting Christian Unity and attended a Eucharistic celebration presided over by Pope Francis.

Addressing the delegation, the Pope recalled the pilgrimage he shared with Ecumenical Patriarch Bartholomew I to the Holy Land last month and their common prayer at the Vatican with the presidents of Israel and Palestine.

“The Lord granted us these occasions of fraternal encounter, in which we were able to express the love uniting us in Christ, and to renew our mutual desire to walk together along the path to full unity,” the Pope said.

“We know very well that this unity is a gift of God, a gift that even now the Most High grants us the grace to attain whenever, by the power of the Holy Spirit, we choose to look at one another with the eyes of faith and to see ourselves as we truly are in God’s plan, according to the designs of his eternal will, and not what we have become as a result of the historical consequences of our sins,” the Pope said.

“If all of us can learn, prompted by the Spirit, to look at one another in God,” he continued, “our path will be even straighter and our cooperation all the more easy in the many areas of daily life which already happily unite us.”

In his remarks to the Pope, Eastern Orthodox Metropolitan John Zizioulas of Pergamo expressed “full commitment… to promote the theological dialogue between our two churches, which continues in a spirit of love, mutual trust and respect.”

He pointed out that the Joint International Commission for Theological Dialogue between the Catholic Church and the Orthodox Church is set to meet in September to continue discussions on primacy in the Church.

“It is a difficult subject but with the grace of God we hope to make progress,” Metropolitan Zizioulas said.

“The way that Your Holiness understands and applies ecclesial primacy offers inspiration and hope in our efforts to reach agreement on this thorny issue.”