Pope marks World Day of the Poor by sharing his lunch 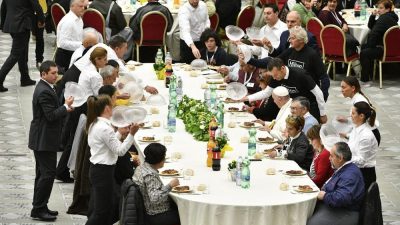 The Pope sitting down to eat lunch with some of Rome’s poorest people. (Photo: Vatican News)

Pope Francis celebrated World Day of the Poor by sharing his lunch with 1,500 homeless people.

During his post-Angelus address to the crowd gathered in St Peter’s Square at midday on Sunday, the Pope said, “The cry of the poor daily becomes stronger but heard less, drowned out by the din of the rich few, who grow ever fewer and more rich.”

After the address the Pontiff walked over to the Paul VI Hall, which was set out to feed 1,500 local homeless people, many of whom had been at 10am Mass with the Pope in St Peter’s Basilica on Sunday.

Before a lunch that included lasagne, chicken pieces and mashed potato, plus tiramisu for dessert, Pope Francis thanked those who had prepared the meal and those who were serving it. He prayed for the Lord’s blessing on all present.

The meal was provided by the Hilton Hotel in Rome and as the Pope and his guests ate, musical accompaniment was provided by a youth band from the Shrine of Our Lady of Pompei.

World Day of the Poor was first marked by the Church last year after Pope Francis instituted it in November 2016 in his apostolic letter, Misericordia et Misera, which was published to celebrate the end of the Extraordinary Jubilee of Mercy.

As reported by CatholicIreland.net last week, in his message for this year’s World Day of the Poor, the Pope said that altruistic gestures were not enough. He urged Christians to become directly involved with those in need.

“The poor do not need intermediaries, but the personal involvement of all those who hear their cry,” he said. “The poor evangelise us and help us each day to discover the beauty of the Gospel. Let us not squander this grace-filled opportunity.”

As a way of encouraging more to answer his call for service to the disadvantaged, the Vatican placed a tent hospital on St. Peter’s Square this week to provide medical services to the homeless.

In the United States, the bishops’ overseas development agency, Catholic Relief Services (CRS), issued a resource pack to help parishes mark World Day of the Poor effectively. Also, in various parts of the world, members of the Order of Malta organised local meals for the needy as part of their observance of World Day of the Poor.

The CRS resource pack included a prayer for World Day of the Poor: