Home > News > Pope speaks in Korea about the quest for peace

Pope speaks in Korea about the quest for peace 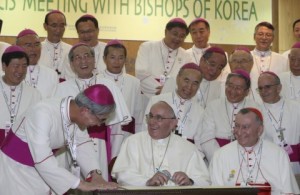 “The quest for peace” is a challenge for every person, especially for diplomats, Pope Francis said on the first day of his five-day visit to South Korea.

Speaking to the South Korean president, Park Geun-hye, and political figures in Seoul’s presidential palace, the Pope also expressed his appreciation for Korea’s efforts to foster reconciliation and stability.

He said these were the “only sure path to lasting peace.”

The Pontiff said quiet listening and dialogue rather than the use of force are the proper tools achieve peace.

Peace, the Pope said, “is not simply the absence of war,” but the work of the virtue of justice, which demands we not only forget past injustices, “but overcome them through forgiveness, tolerance and cooperation.”

Addressing the domestic challenges of the Korean nation, the Pope urged the country’s leaders to resist the lures of a consumerist society, and be alert particularly to the needs of the old and the young.

“A wise and great people not only cherish their ancestral traditions; they also treasure their young, seeking to pass on the legacy of the past and to apply it to the challenges of the present,” he said.

The Pontiff encouraged further steps to consolidate democracy within the country.

“The elderly and the young people, who, by preserving memory and inspiring courage, are our greatest treasure and our hope for the future,” the Pope said in a reference to his beatification of 124 martyrs and celebration of the closing Mass at the 6th Asian Youth Day.

The Pontiff commented that Korean culture “understands well the inherent dignity and wisdom of our elders and honors their place in society,” and also, “treasures their young, seeking to pass on the legacy of the past and to apply it to the challenges of the present.”

South Korea’s population of 50.4 million is composed of Catholics who account for 10%, Protestants who represent nearly 20%, and Buddhist (23%). Nearly half of South Koreans profess no religion.

The trip is the Pope’s third apostolic journey outside Italy, following travels to Brazil for World Youth Day in July 2013 and the Holy Land in May. 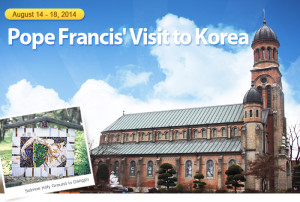 During his five days in South Korea, the Pope is scheduled to deliver six addresses and preach four homilies.

Later on Thursday, speaking to a gathering of the country’s Catholic bishops, the Pope addressed the challenge of materialism.

He urged the bishops not to rely on efficient management, planning and organisation models inspired by the world of business and a lifestyle and mentality that are guided more by worldly criteria of success and power rather than by the criteria Jesus presents in the Gospel.

“You are the children of the martyrs, heirs to their heroic witness of faith in Christ,” the Pontiff reminded them.

The Church in Korea, the Pope said, is esteemed for its role in the spiritual and cultural life of the nation and its strong missionary impulse.

He continued, “being guardians of memory means more than remembering and treasuring the graces of the past; it also means drawing from them the spiritual resources to confront (…) the hopes, the challenges and the promises of the future”.

Being guardians of hope, Pope Francis said, means showing care and concern for the children and the elderly in our communities.

But it also means ensuring that the prophetic vision of the Church remains evident “in its concern for the poor and in its programs of outreach, particularly to refugees and migrants and those living on the margins of society”.