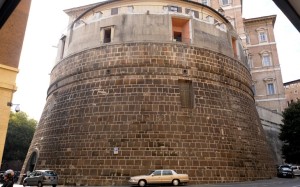 A new decree issued by Pope Francis on Thursday will give the Vatican’s internal watchdog, the Financial Information Authority, increased powers over the Vatican bank and its financial activities.

The motu proprio is intended to prevent “money laundering, the financing of terrorism, and the proliferation of weapons of mass destruction.”

It tightens the safeguards against money laundering at the Vatican, as well as strengthening internal regulations. It also establishes a new Financial Security Committee to coordinate financial transfers.

The motu proprio increases the power of the Financial Information Authority, giving it supervisory authority over all agencies “habitually engaged in financial affairs.”

The papal decree underlines that this is a response to a recommendation made by European banking officials.

Commenting on the new decree, the Vatican’s senior press spokesman, Fr Federico Lombardi, said the decree was mainly aimed at closer coordination of the financial activities of the Vatican and the many institutes dependent upon it.

Fr Lombardi said the principal aim of the decree is to reinforce and extend the competency of the Financial Information Authority, charging it with what’s called ‘prudential supervision’ over all entities engaged in financial activities.

He said the move will lead to closer monitoring of the Institute for Works of Religion (IOR) – the formal name of the Vatican bank – and is made in response to the recommendations made by Moneyval, the Council of Europe’s anti-money laundering agency.

Pope Francis has made it clear that cleaning up the Vatican administration one of his central aims. He has indicated his willingness to be advised by international experts on how to improve transparency and enforce accounting principles.

The Pontiff has also set up a special commission of inquiry to reform the IOR. In July, the Pope said the IOR must become “honest and transparent”.

This followed the arrest in June of a senior Vatican official who was at the centre of a money smuggling investigation. Monsignor Nunzio Scarano is suspected of being involved in money laundering.

He and two others were arrested by Italian police on suspicion of trying to move €20m illegally.

The Vatican bank handles the payroll for up to 5,000 Vatican employees.

It also handles the funds for the central administration of the Catholic Church and holds the accounts of cardinals, bishops, priests, nuns and religious orders around the world. It has assets worth € 6.2 billion.