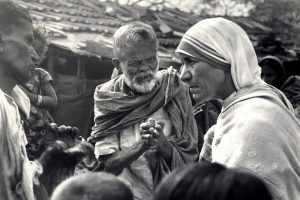 Pope Francis treated some 1,500 homeless people to Sunday lunch yesterday in the atrium of the Paul VI Hall as part of the Vatican’s celebration of the canonisation of Mother Teresa.

The Pope’s guests are people who are in contact with the houses of the Missionaries of Charity around Italy in places like Milan, Bologna, Florence, Naples and Rome.

They were bused in specially for the occasion and were served by 250 Missionary of Charity Sisters, 50 Brothers of the congregation and other volunteers.

Ahead of the lunch, the guests attended the canonisation Mass.

During his homily for the Rite of Canonisation, Pope Francis told a packed St Peter’s Square that “Mother Teresa, in all aspects of her life, was a generous dispenser of divine mercy, making herself available for everyone through her welcome and defence of human life, those unborn and those abandoned and discarded.”

To the many volunteers in Rome for the Jubilee for Volunteers and Workers of Mercy, Pope Francis offered St Teresa of Calcutta as a “model of holiness.”

Elsewhere in his homily, the Pontiff said Mother Teresa was committed to defending life, ceaselessly proclaiming that “the unborn are the weakest, the smallest, the most vulnerable”.

For Mother Teresa, mercy was the “salt” which gave flavour to her work, it was the “light” which shone in the darkness of the many who no longer had tears to shed for their poverty and suffering.

Pope Francis said her mission to the urban and existential peripheries remains for us today an eloquent witness to God’s closeness to the poorest of the poor.

“Today, I pass on this emblematic figure of womanhood and of consecrated life to the whole world of volunteers: may she be your model of holiness! May this tireless worker of mercy help us to increasingly understand that our only criterion for action is gratuitous love, free from every ideology and all obligations, offered freely to everyone without distinction of language, culture, race or religion.”

He noted that Mother Teresa loved to say, “Perhaps I don’t speak their language, but I can smile”.

And he urged the faithful to carry her smile in their hearts and give it to those whom they meet along our journey, especially those who suffer.

“In this way, we will open up opportunities of joy and hope for our many brothers and sisters who are discouraged and who stand in need of understanding and tenderness.”