Pope Francis will recite the Angelus at Knock on 26 August 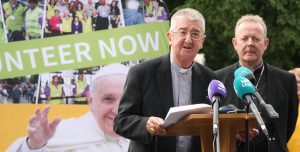 Archbishop Michael Neary of Tuam has warmly welcomed the news that Pope Francis will visit the national shrine in Knock, Co Mayo during his two-day visit to Ireland in August.

In a statement, Archbishop Neary recalled how during the Irish bishops’ ad limina visit to the Vatican in January 2017, he invited the Pontiff to make a pilgrimage to the Shrine of Our Lady of Knock.

“It seems to me that an opportunity to visit Knock is something that the Holy Father personally desires,” Archbishop Neary said as he noted the Argentine’s “personal devotion to Mary”.

The visit of Pope Francis will be the second time a pope has visited Knock shrine as Pope St John Paul II also visited on 30 September 1979 to mark the centenary of the Apparition.

Following the release of Pope Francis’ itinerary, Fr Richard Gibbons, Rector of Knock Shrine said, “It is an honour to welcome Pope Francis to Knock Shrine on behalf of our pilgrims, parishioners and staff. We are humbled that the Holy Father will come to spend time with us in Knock to pray for families.”

“His Holiness has great devotion to Our Lady and also St Joseph, as represented on his Papal Coat of Arms. It is fitting that he should visit Knock, where an Apparition of Our Lady, St Joseph, St John and the Lamb of God was witnessed on 21st August 1879.”

“St John Paul II visited the Shrine to celebrate the centenary of the Apparition in 1979. We are delighted that Pope Francis will fly into Ireland West Airport Knock to begin his pilgrimage to the Shrine. Monsignor Horan, who was so instrumental in the development of the airport would be very proud to see this day.”

A spokesman for Ireland West Airport also expressed delight that the airport, founded by Monsignor James Horan, will play a part in the historic papal visit.

It was following the first ever Papal visit to Ireland in 1979, when Pope John Paul II visited Knock Marian Shrine, that Monsignor Horan began his campaign to build an international airport in Mayo close to the Shrine.

Thirty-eight years later the airport is now the fourth busiest in the country and with record passenger numbers of close to 800,000 expected this year.

“This will be a truly historic occasion and will showcase the airport, Knock Shrine and indeed the West of Ireland to a global audience of millions which will have a hugely positive impact for tourism to the region.”

He also paid tribute to Knock rector Fr Richard Gibbons and his team who he said had “worked tirelessly over the last number of months to make this happen”.

Pope Francis will arrive into Ireland West Airport on a specially chartered Aer Lingus flight from Dublin on Sunday morning 26 August from Dublin and will travel by motorcade the 20-kilometre route along the N17 to Knock shrine.

He will pray at the newly refurbished Apparition Chapel before praying the Angelus before a crowd of up to 45,000 people in the grounds of Knock shrine.

Following his visit to the Shrine, the Pope will depart for Dublin at 11.15am and later that afternoon he will preside over the concluding Mass of the World Meeting of Families in the Phoenix Park at 3pm.

Speaking in Maynooth on Monday, Archbishop Diarmuid Martin said he and Archbishop Eamon Martin were launching something that is already well underway, both the events for the World Meeting of the Families and the Amoris programme, which has been hosted in every parish and in every diocese in the country.

“For me, Pope Francis, is very much a free man. He has the ability to see how we can live in a world where faith seems marginal and yet manage to touch hearts and challenge people to reflect and discern on the fundamental values of society, particularly in the area of family,” the Archbishop of Dublin said.

He continued, “Family, as anyone who has read Amoris Laetitia will know, is about love but not an over idealised idea of love but a love that is imperfect with failings but still one that enriches lives.”

“I think most people in Ireland talking and thinking about family think about the love of spouses for one and another, and the love of parents for their children, and the love of families that enrich the lives of communities. The Pope is coming to strengthen that reality in the world of Ireland.”

“Therefore, the World Meeting of Families is one of those great events in the life of the universal church to celebrate, recognise and affirm families and their central importance to the mission of the church and to the success and well-being of society.”

The Archbishop of Armagh admitted that there was disappointment among Catholics in Northern Ireland that the Pope would not be making a visit north of the border.

“We really were hoping that this might be an opportunity for the Holy Father to visit Northern Ireland and I think he really would love to come to Northern Ireland – just the pressures of this particular event and all that he wants to do for the World Meeting of Families has overtaken that,” he explained.

Dr Martin also said he felt it was “very important” that the World Meeting of Families and the visit of Pope Francis to Ireland was seen not simply as a significant event for the Catholic Church in Ireland.

“There is a huge number of overseas visitors coming, probably one of the biggest for any World Meeting of Families to date; we have a lot of young people and a lot of children with their mums and dads and family members. I think this will be a great opportunity to showcase Ireland as a modern country but also as a country which has a great tradition of faith and many people who continue to want to hand on that faith to their children and grandchildren.”

ROMA-DUBLIN
08:15    Departure by plane from Rome/Fiumicino for Dublin
10:30    Arrival at Dublin International Airport

OFFICIAL WELCOME
10:45    Transfer to Áras an Uachtaráin
11:15    Arrival at the Presidential Residence

WELCOME CEREMONY in front of the main entrance of the Residence
11:30    COURTESY VISIT TO THE PRESIDENT in the Presidential Residence
12:00    Transfer to Dublin Castle
12:10    Arrival at Dublin Castle

DUBLIN-KNOCK-DUBLIN-ROMA
08:40    Departure by plane for Knock
09:20    Arrival at the Airport in Knock
Immediate transfer to the Shrine
09:45    Arrival at Knock Shrine

11:15    Departure by plane for Dublin
11:50    Arrival at Dublin International Airport
Lunch with the Papal Delegation

FAREWELL CEREMONY
18:45    Departure by plane for Roma/Ciampino
23:00    Arrival at the Airport of Roma/Ciampino

Click on the titles below for more information on these events: