Home > News > Pope Francis to visit Israel next May

Pope Francis to visit Israel next May 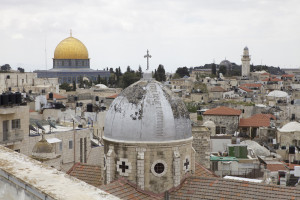 Pope Francis will make a two-day visit to Israel in May 2014 according to Israeli government officials.

However, the Vatican so far hasn’t confirmed mounting speculation that the visit will take place from 25 – 26 May.

According to The Tablet, Vatican spokesman Fr Federico Lombardi said he could not comment on the Pontiff’s travel plans.

“It is, in the first instance, up to the Pope himself to decide upon and to announce such a visit,” he said.

Israeli sources claim Vatican officials have concluded a trip to the Holy Land, during which they made preliminary arrangements for the papal visit, which will include stops in the Palestinian territories.

The papal trip will include Mass in Bethlehem in a visit that lasting less than 48 hours.

This will be Pope Francis’ first visit to Israel, and his first visit outside the Vatican after his trip to Brazil for World Youth Day last summer.

Ahead of his visit to Israel, sources have suggested that the Pontiff will also visit Jordan on 24 May from where he will fly from Amman.

He will receive an official State reception in Israel and will meet President Shimon Peres and with various religious leaders.