Pope Francis urges people of Limerick to pray for him 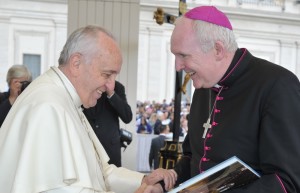 Pope Francis urged the people of the Diocese of Limerick to pray for him as he greeted Bishop Brendan Leahy and Bishop Emeritus Donal Murray at his weekly audience in St Peter’s Square on Wednesday.

Bishops Leahy and Murray were leading a 35-strong group of pilgrims from the diocese who travelled to Rome to mark the feast-day of St John Paul II.

During their brief meeting with the Pope, the bishops presented him with ‘The Diocese of Limerick – An Illustrated History’ which was published late last year, as well as a copy of Bishop Leahy’s recent pastoral letter announcing a Synod for Limerick.

Commenting on the moment, Bishop Leahy said that Pope Francis had a “remarkable aura of spirituality and humility”.

“He just lifted his eyes to us and said ‘pray for me’. I felt it was like a message to the whole diocese and so I would ask the people of Limerick to please do as Pope Francis asks and pray for him.”

According to Bishop Leahy, the Pope has had a remarkable impact since his papal inauguration.

“He has shown his intention to encourage creativity and mission in the Church. He has been courageous and selfless in this and he does, indeed, need our prayers as he continues on this path to creating a more Spirit-filled and united Church,” he said.

During his general audience, the Pope spoke of the Church as the Body of Christ.

Referring to the Apostle Paul’s advice to the quarrelling community in Corinth, the Pope noted that many of our Christian communities, our parishes are divided by envy, gossip, misunderstanding and marginalisation.

“This  dismembers us” he said and warned that it is the beginning of war. “War does not begin on the battlefield: wars begin in the heart, with this misunderstanding, division, envy, with this fighting among each other.”

No one is superior in the community of the Church, and when we feel tempted to think of ourselves as superior “especially to those who perform the most humble and hidden services” the Pope said we should “remember our sins” in shame before God.

The way to counter such division is to appreciate the individual qualities and gifts of others and give thanks to God for them.

At the end of the general audience which brought together around 70,000 pilgrims, Pope Francis specifically referred to the group from Limerick, who were seated near the front. 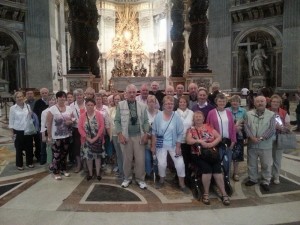 “It was an incredible experience, the best I have had,” said Denise Hannan, from St Mary’s Parish.

“For me, the biggest memory was being so close to Pope Francis. It was the nearest thing to meeting God.”

Sean O’Shaughnessy from Kilcornan added, “I was so proud to be a Limerick man when the Pope mentioned about the Limerick Diocese.

During an early morning Mass at the tomb of St John Paul II on Tuesday, Bishop Emeritus Donal Murray recalled the profound impact that the Saint left on Limerick 35 years ago when he celebrated Mass at the city’s former racecourse.

“He summed it up when he said, ‘Lay people today are called to a strong Christian commitment, to permeate society with the leaven of the Gospel, for Ireland is at a point of decision in her history’.”

“Thirty-five years on, there is no room for doubt now about how right he was. Ireland has indeed been at a point of decision and we have many reasons to ask whether we are always  choosing wisely. We know well that these are crucial years for our country and for our Church,” said Bishop Murray.