Pope Francis talks to The Tablet about COVID-19 pandemic 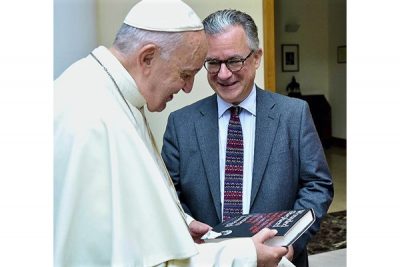 Pope Francis has criticised the treatment of the homeless who were put in quarantine in open-air parking lots in Las Vegas, while the city’s hotels remained empty as tourists stayed away due to the COVID-19 pandemic.

Speaking to papal biographer, Dr Austin Ivereigh, in an exclusive interview published by the international catholic weekly, The Tablet, Pope Francis said this kind of treatment of the homeless was an example of the “throwaway culture in practice”.

The Pontiff told the British commentator and journalist, “It’s true, a number of governments have taken exemplary measures to defend the population on the basis of clear priorities. But we’re realising that all our thinking, like it or not, has been shaped around the economy. In the world of finance it has seemed normal to sacrifice [people], to practise a politics of the throwaway culture, from the beginning to the end of life.”

He said he was thinking, for example, of pre-natal selection.

“It’s very unusual these days to meet Down’s Syndrome people on the street; when the scan detects them, they are binned. It’s a culture of euthanasia, either legal or covert, in which the elderly are given medication but only up to a point.”

The Pope stressed that the crisis is affecting all, rich and poor alike, and was putting a “spotlight on hypocrisy”.

“I am worried by the hypocrisy of certain political personalities who speak of facing up to the crisis, of the problem of hunger in the world, but who in the meantime manufacture weapons,” he challenged.

Pope Francis also paid tribute to the “saints who live next door” describing the doctors, volunteers, religious sisters, priests, shop workers who all continue to perform their duty so that society can continue functioning as “heroes”.

“How many doctors and nurses have died! How many religious sisters have died!” he lamented.

Austin Ivereigh asked Pope Francis if he had a particular message for the elderly who were self-isolating, for confined young people, and for those facing poverty as result of the crisis.

Pope Francis noted that the isolated elderly were experiencing solitude and distance. “How many elderly there are whose children do not go and visit them in normal times! I remember in Buenos Aires when I visited old people’s homes, I would ask them: And how’s your family? Fine, fine! Do they come? Yes, always! Then the nurse would take me aside and say the children hadn’t been to see them in six months. Solitude and abandonment … distance.”

Those who have been impoverished by the crisis, the Pope said, are today’s deprived, they have lost everything, or they are going to lose everything.

Elsewhere in the interview, Pope Francis said every crisis contains both danger and opportunity: the opportunity to move out from the danger.

“Today I believe we have to slow down our rate of production and consumption (Laudato Si’, 191) and to learn to understand and contemplate the natural world. We need to reconnect with our real surroundings. This is the opportunity for conversion.”

He said the crisis was also the moment in which to see the poor.

Dr Ivereigh explained how he secured the interview.

“Towards the end of March I suggested to Pope Francis that this might be a good moment to address the English-speaking world: the pandemic that had so affected Italy and Spain was now reaching the United Kingdom, the United States and Australia. Without promising anything, he asked me to send some questions. I picked six themes, each one with a series of questions he could answer or not as he saw fit.”

“A week later, I received a communication that he had recorded some reflections in response to the questions. The interview was conducted in Spanish; the translation is my own.”

The first question Austin Ivereigh put to the Pope asked him about how he was experiencing the pandemic and lockdown, both in the Santa Marta residence and the Curia more generally.

Pope Francis explained that the Curia is trying to carry on its work and to live normally, organising shifts so that not everyone is present at the same time.

“It’s been well thought out. We are sticking to the measures ordered by the health authorities. Here in the Santa Marta residence we now have two shifts for meals, which helps a lot to alleviate the impact. Everyone works in his office or from his room, using technology. Everyone is working; there are no idlers here,” he stated.

As to how he was living the lockdown spiritually, the Pope responded, “My major concern – at least what comes through my prayer – is how to accompany and be closer to the people of God. Hence the livestreaming of the 7am Mass [I celebrate each morning] which many people follow and appreciate, as well as the addresses I’ve given, and the 27 March event in St Peter’s Square. Hence, too, the step-up in activities of the office of papal charities, attending to the sick and hungry.”

The full interview can be read on the Tablet’s website here: https://www.thetablet.co.uk/features/2/17845/pope-francis-says-pandemic-can-be-a-place-of-conversion-